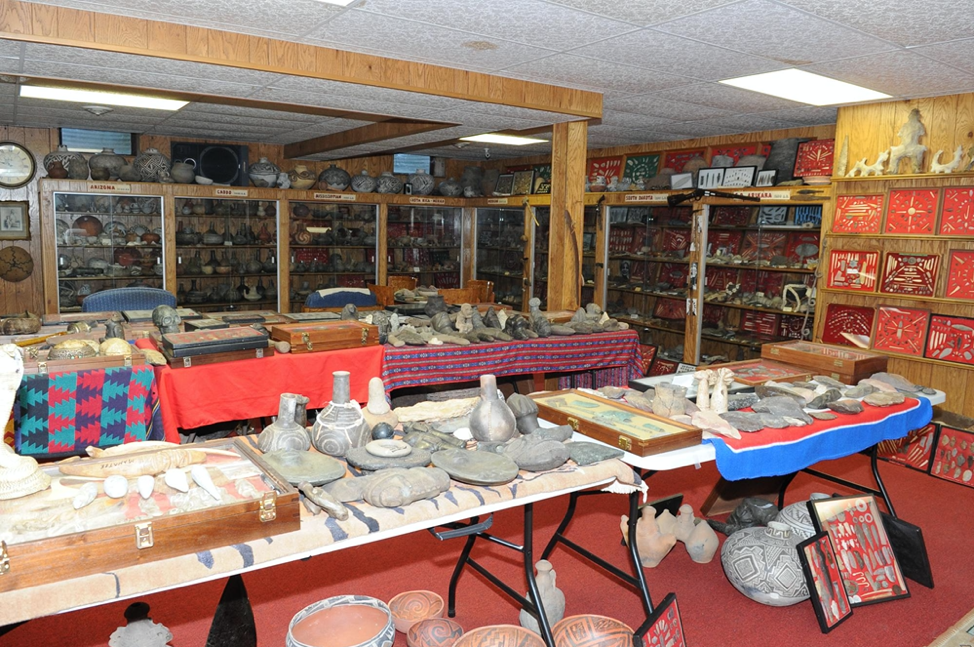 Artifacts on display at Donald Miller's farm in 2014. Photograph: Federal Bureau of Investigation.

On February 14, 2020, the FBI’s Art Crime Team announced the repatriation of over 450 cultural and historical artifacts to the Republic of Haiti. The repatriated artifacts represent the continued efforts of the FBI to return some of the 42,000 items that agents discovered on an Indiana farm in 2014. After receiving a tip alleging possession of human remains, the FBI Art Crime Team stormed the home and amateur museum of then 90-year-old Donald Miller. The agents were astounded by what they found.

Miller’s home was filled floor to ceiling with artifacts from across the globe, including Aztec figurines, Ming Dynasty jade, Italian mosaics, and World War II paraphernalia. His extensive collection featured artifacts from dozens of countries, among them Haiti, Australia, New Guinea, New Zealand, Peru, China, Russia, Italy, Greece, and the United States. Miller’s obsession with collecting began with a childhood hobby of searching for arrowheads on his family’s farm. As an adult, he traveled to two-hundred countries doing missionary work, evidently returning with illicit souvenirs.

Despite the FBI’s late discovery of the collection, Miller’s amateur museum was no secret. Prior to retiring, Miller regularly used his vacation time to go on archaeological digs. He willingly showed his collection to neighbors, local reporters, and even the occasional Boy Scout troop. Before learning about the FBI investigation, Miller was in the process of loaning arrowheads, pottery, and tools to the Shelby County Historical Society's Grover Museum.

Miller’s collecting may seem like a harmless hobby to some, but by conducting unauthorized digs and smuggling artifacts out of their home countries, he likely violated multiple state, federal, and foreign laws, as well as numerous international treaties. In 1970, the United Nations Education, Scientific and Cultural Organization (UNESCO) adopted the Convention on the Means of Prohibiting and Preventing the Illicit Import, Export and Transfer of Ownership of Cultural Property. The international treaty, signed by 140 nations, provides preventative measures, restitution provisions, and an international cooperative framework for protecting cultural property and preventing its illicit export. In the years since the Convention’s adoption, many nations have ratified their own cultural patrimony laws prohibiting the unauthorized excavation and export of the nations’ cultural property.

Some of Miller’s collecting predated these laws and therefore may have been legal. However, at least four decades of his collecting took place after the 1970 Convention, likely making a substantial portion of his collection contraband. The damage caused by his actions goes beyond the technical violation of U.S., foreign, and international law. Though Miller made efforts to preserve the antiquities he stole, he could not provide them with museum-quality care, resulting in inevitable damage to the artifacts. Further, while scholars can learn a lot from analyzing an individual artifact, significant information is derived from the context of their excavation—information that is lost forever when artifacts are illicitly excavated.

Beyond the loss to scholarship, the looting of cultural heritage sites, especially gravesites, does irreparable damage to the people to whom those sites belong. Agents horrifyingly discovered 2,000 human bones in Miller’s collection. The remains comprise about 500 human beings, most of whom were dug up from Native American burial sites. For centuries, amateur and professional archaeologists have looted Native American gravesites in the name of science and curiosity. The desecration of Native graves continues to be felt by Native people today.  “They could very well be my own great, great, great, great grandfather, or grandmother.... I characterize it as being ripped out of the earth,” said Pete Coffey, a tribal official of the Mandan, Hidatsa, and Arikara Nation. Coffey, among other tribal officials, is working with the FBI to ensure that the remains are returned to their rightful homes.

Before he died in 2015, Miller cooperated with the FBI to help return the remains and artifacts to their respective tribes and countries of origin. As of 2019, about fifteen percent of the seized artifacts had been successfully repatriated. The repatriation process has been long and painstaking, but the FBI’s recent return of 479 artifacts to Haiti demonstrates the Bureau’s continued commitment to righting this decades-old wrong.