The evidence? Television—where references to IP are not only included as plot points (e.g., a patent dispute in The Good Wife allows the show to include Christian mediation, which then presents an opportunity for Alicia to connect with her daughter), but are also included to address IP law directly. We actually see this pretty frequently in animated shows for adults, which, now that it has been mentioned, you will definitely start noticing. I present some examples below, not only to show that IP is entertaining, but also because, in general, the representation of IP on television is significant: (1) It shows us how these creators feel about the relative strength of IP rights, and what they believe the law currently is; and (2) viewers who don’t otherwise encounter IP law will absorb any “facts” that are regularly presented, whether those facts are correct or are common misconceptions.

One subcategory of references to IP on television is what I’d call The Expression of Indignation. Indignation here takes two primary forms: that of the creator who feels that something has been viciously stolen from them; and that of the creator who cannot believe their own work is subject to claims of theft. While not explicitly referring to emotions, much of IP law is calibrated to respond to this dichotomy.

Consider the difference between the emotions involved with IP disputes and real property disputes. Much about the law of trespass is a legal reflection of the emotional distress caused when someone encroaches on one’s land: horror at the invasion of privacy or fear of the loss of autonomy and freedom. There may be many possible explanations for why real property is so closely protected in the American legal system, but there’s at least a definite correlation between our laws and the emotions that trespass can stir.

A similar correlation exists in IP law. Something different happens when a creator faces the specter of infringement than when a property owner sees a trespasser. From a substantial review of references to IP on television, I conclude that indignation seems to be the primary emotion that is portrayed in the medium. And each portrayal acts as a valuable narrative representation; together, they can allow creators to recognize the full spectrum of indignations that they have felt—or likely will feel at some point in the future. In the copyright space, for example, artists want to protect their own rights; but the same artists do not want to be sued for infringement when they view their art as a transformative contribution or homage, produced through real artistic labor. Artists feel ripped off when they are not given credit, and when they are not getting paid—but sometimes they know they can’t have both, and sometimes they need to hire assistants who will feel the same conflict. Each of these are entirely reasonable responses! And they track the subtle doctrines of IP, just as they would not track the law of real property.

Art is valuable in part because it makes us stop and re-evaluate ourselves, and in part because it gives space to a range voices that we might not have listened to otherwise. Television is art. When it makes off-hand references to IP, we should listen.

In the following examples, note the range of indignations. And note the fact that, although they are extreme (because, well, this is comedy), they each get at a very real, inherent emotional response that creators will feel, and that lawmakers should not ignore. Also, please do note that IP is entertaining.

3. BoJack Horseman: I only want respect … or maybe a small payment.

* If television is art, BoJack Horseman is the proverbial Mona Lisa.

4. Futurama: No way there’s not a copyright issue here. 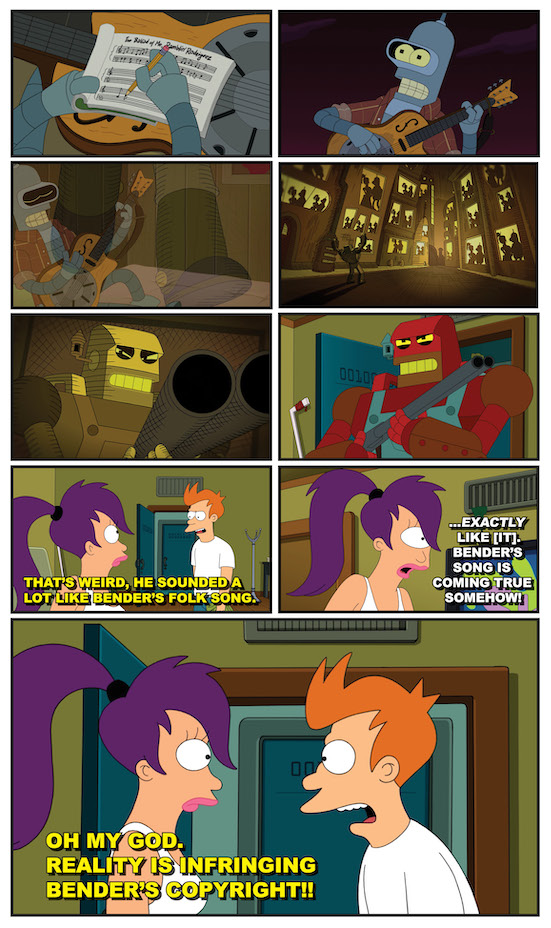 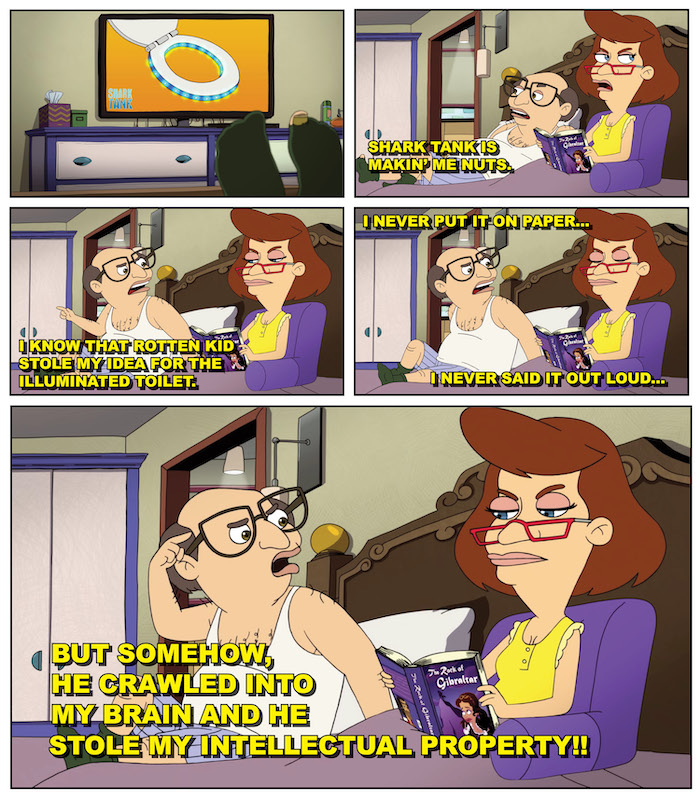