Nintendo Has “No Choice” But to Stop Fans Playing Their Games? #FreeMelee and Fair Use in Online Gaming

We are all trying to make do and figure out ways to socialize in this age of pandemic.  From Fortnite to Among Us, everyone from your teen cousin to members of Congress appears to be online gaming. [1]  Yet, one company that should be loving this attention has gone the other way and asked its users to stop: Nintendo.  Nintendo recently sent a cease-and-desist demand to the organizers of an online tournament centered around one of their properties, Super Smash Bros. Melee (“SSBM”). [2]

For those who may not have a background in competitive gaming and are confused why this matters, here is some background.  SSBM came out in 2001 on Nintendo’s GameCube gaming system.  It could also be played on a later system, the Nintendo Wii.  Both systems, and SSBM itself, are no longer sold by Nintendo.  To play the game disc as intended, one needs to procure one of these discontinued gaming systems and a television that can support those systems (usually a CRT).[3]  The basic premise of SSBM is to choose from a selection of Nintendo-owned characters and fight either computers or your friends in a, well, melee battle.

Despite SSBM being a borderline-ancient video game, and the issuance of sequels, it is still widely played across the world.  Fans have created their own competitive circuits, ranging from local weekly competitions to yearly international summits.  There are professional players, including those who have won over $300,000 over their careers. [4]  Usually, these tournaments are in-person and played on the Nintendo-sanctioned hardware and software.  However, this is impossible during a pandemic, so to allow players to still compete, socialize, and even raise money for charity,[5] a few players developed a program, Slippi,[6] that allows SSBM users to play each other on a computer in real time, along with other novel features not available via Nintendo’s discontinued hardware.  A yearly tournament in Detroit called The Big House, the longest running annual SSBM competition, announced in July that it planned to use Slippi in order to still hold the event. [7]  But, on November 19th, Nintendo issued its aforementioned C&D to the event organizers and this statement: 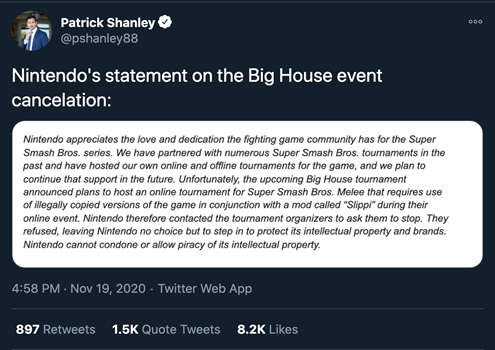 From a copyright perspective, it is unclear how Nintendo can have a successful legal position.  Sure, organizers probably cannot argue for an implied license given that Slippi is about a year old.  But, players have been using similar online emulators for years.  It looks like Nintendo is counting on these gamers to not be able to have legal teams to defend themselves via fair use.

Regardless if the alleged infringement did occur and can be proven (for it is possible to legally upload your own game online), cursory fair use analysis weighs in the organizers’ favor.  First of all, the use is transformative, as courts have already found that emulators, though they appear to copy the game manufacturer’s work, actually create a new platform for games and add new features.[8]  As far as the commerciality of the use, that could go both ways: players both make money on the games and raise substantial funds for charity with tournament pool proceeds.  Because Slippi can be seen as transformative and as a work that does not necessarily substitute for the hardware, it would be difficult to find a market harm on Nintendo.  Even more so, Nintendo chose to stop making the game and the hardware years ago.

Nintendo’s only real arguments do not appear that strong, either.  It could try arguing market harm by claiming that people who use Slippi to play SSBM are not buying their newer sequels of Super Smash Bros. that can be played online.  But, that would require discovery to prove, especially since colloquial data suggests that Slippi may even encourage more people to buy Nintendo’s games.  It is also worth considering that the games have separate copyrights, meaning that Slippi’s influence on current games may not matter.  Finally, Nintendo could try to make out a moral rights argument—its president has maintained that the purpose for their games is mass appeal, not competition—but courts have not found that compelling in fair use balancing. [9]

This is not the first time Nintendo has tried to shut down a major SSBM tournament.[10]  Back then, Nintendo eventually backed down when it witnessed the public backlash.  One could expect the same now, especially considering the profundity of #FreeMelee tweets.  Yet, the language in Nintendo’s official statement should make anyone who enjoys playing classic games online wary of possible copyright infringement actions.