A Racket over a Jacket: Does Lego’s “Queer Eye” Set Infringe a Designer Leather Jacket?

A $99 toy set could have avoided thousands in litigation costs for Lego. The kerfuffle begins with the world’s largest toy company introducing a toy set starring the Fab Five from Netflix’s Queer Eye.[1] But no one from Lego or Netflix obtained the rights to turn designer clothing worn by the Fab Five on the show into Lego apparel.

Enter James Concannon, a multidisciplinary artist who designed several items worn by the Fab Five’s Antoni on the show, each of which Netflix duly obtained a release for—except the crucial jacket.[2] This copyright-registered leather jacket featured Concannon’s “original artwork, compos[ed] and arrang[ed] . . . to reflect Concannon’s signature style.”[3] Concannon maintains he never granted Netflix a license to display the work—and he “certainly” never licensed the jacket to Lego.[4] But when Lego announced its Queer Eye collab, the Lego Antoni toy was wearing a Lego version of Concannon’s “really iconic leather jacket.”[5] Concannon cried foul. 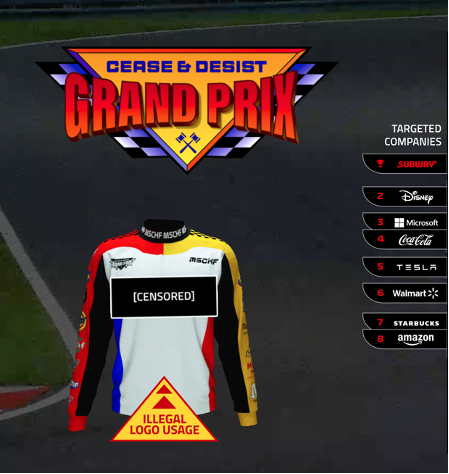 He first called customer service to complain. The company allegedly offered him a complimentary Fab Five Loft set for his son—which he might have accepted.[6] But the set never arrived, customer service denied its offer, and Concannon’s followers told him to file suit, which he did.[7]

Concannon’s suit alleges copyright infringement for “copying, publicly displaying, distributing, and creating derivative works” of his jacket.[8] One issue will be the scope of Concannon’s copyright. The Copyright Act forbids protection for the utilitarian aspects of any “useful article,”[9] such as a leather jacket. Instead, Concannon receives protection for the elements of the jacket that can be perceived separately from the jacket and would qualify for protection if so imagined.[10] The individual decals should easily pass this test (Concannon created them independently and then added them to the jacket, after all), but it may be more difficult to imagine Concannon’s arrangement of art on a jacket separately from the uncopyrightable leather jacket.

Assuming the decals pass the hurdle of protection, is Lego Antoni’s jacket “substantially similar”? Although the leather jacket itself was certainly “recast,”[11] the “total concept and feel” of the jacket is not protected.[12] Concannon is likely to argue Lego is guilty of “inexact-copy infringement” of the individual elements.[13] But Concannon’s copyright in the peace sign will be thin, the jacket back features a modified phrase, and the skull has been changed into a Lego figure head. These non-trivial variations may be new elaborations on the ideas underlying Concannon’s works rather than copies of his expression.[14] If Lego copied only Concannon’s ideas instead of his expression, there was no infringement.[15] Lego’s designers were admittedly inspired by Concannon’s jacket, but the articles may not be “substantially similar” under U.S. copyright law.

Perhaps sensing the weakness of his copyright infringement claim, Concannon also alleges unfair competition under federal and state law.[16] He claims common-law protection for “the unique combination of provocative, tongue-in-cheek phrases with hand-painted, graffiti-style lettering” featured on the back of the jacket.[17] But before he can receive protection for this trade dress, he will need to prove both that it is nonfunctional[18] and that it has secondary meaning.[19] Proving non-functionality should be easy, because Concannon describes the trade dress as the combination of several aesthetic elements, protection for which would not limit the public domain. As to secondary meaning, Concannon may also have a decent argument: The amended complaint and accompanying exhibits lay out celebrity promotion and collaboration, continuity of use, and third-party counterfeiting, all of which are indicative of secondary meaning.[20]

Even if his trade dress is protected, however, Concannon may struggle to prove actionable likelihood of confusion under the Second Circuit’s Polaroid test.[21] Concannon’s trade dress seems weak, unregistered and inconsistent across clothing items as it is (the phrases, lettering, and coloring all change in each work). The two jackets feature similar but not identical lettering, but the featured phrase goes from tongue-in-check to unabashedly wholesome. Moreover, it appears unlikely that Concannon would bridge the gap between his streetwear brand and toy sales. Concannon also does not allege any actual confusion. Lego’s intention “to evoke Concannon’s signature style and brand” weighs in Concannon’s favor, but he only receives a remedy if consumers were thereby confused. This commentator isn’t so sure consumers would be under the Polaroid test, though discovery may produce evidence to support Concannon’s claim.

Then again, the circumstances of the case may change the dynamic in the artist’s favor. The Lego toy is explicitly branded as a cross-promotional collaboration. A reasonable juror might conclude consumers would think all creators whose brands are featured consented to the collab. Concannon amended his complaint to add the unfair competition claim, indicating he, too, think this claim might be the winning one.

Concannon has non-frivolous but not sure-fire claims under both the Copyright and Lanham Acts. As with most civil litigation, a settlement is likely, though at what cost? One thing is for certain: Lego should have sent the $99 toy set when Concannon first called customer service.