The Problem of Quantifying Equality [1]

Central to the problem of algorithmic bias is the challenging problem of how to quantify the bias produced by an algorithm. How should we measure this bias, and when should the bias be enough to allow a claimant to mount a legal challenge?

In Bias In, Bias Out, Sandra Mayson provides an example of this fundamental problem using the COMPAS program, which is an algorithm predicting the likelihood a criminal defendant becomes a recidivist.[7] Courts use COMPAS risk assessment predictions to determine when to set a defendant free—from setting bond amounts to sentence lengths.[8] In 2016, ProPublica published a scathing report, criticizing COMPAS for producing significant racial disparities.[9] COMPAS, in response, rejected ProPublica’s criticisms.[10] As Sandra Mayson explains, however, this disagreement is actually attributable to how COMPAS and ProPublica used different definitions of equality.[11]

Figure 1.[12] The results of an algorithm predicting rearrest.

Table 3.[13] Different equality measures for the algorithm results of Figure 1. 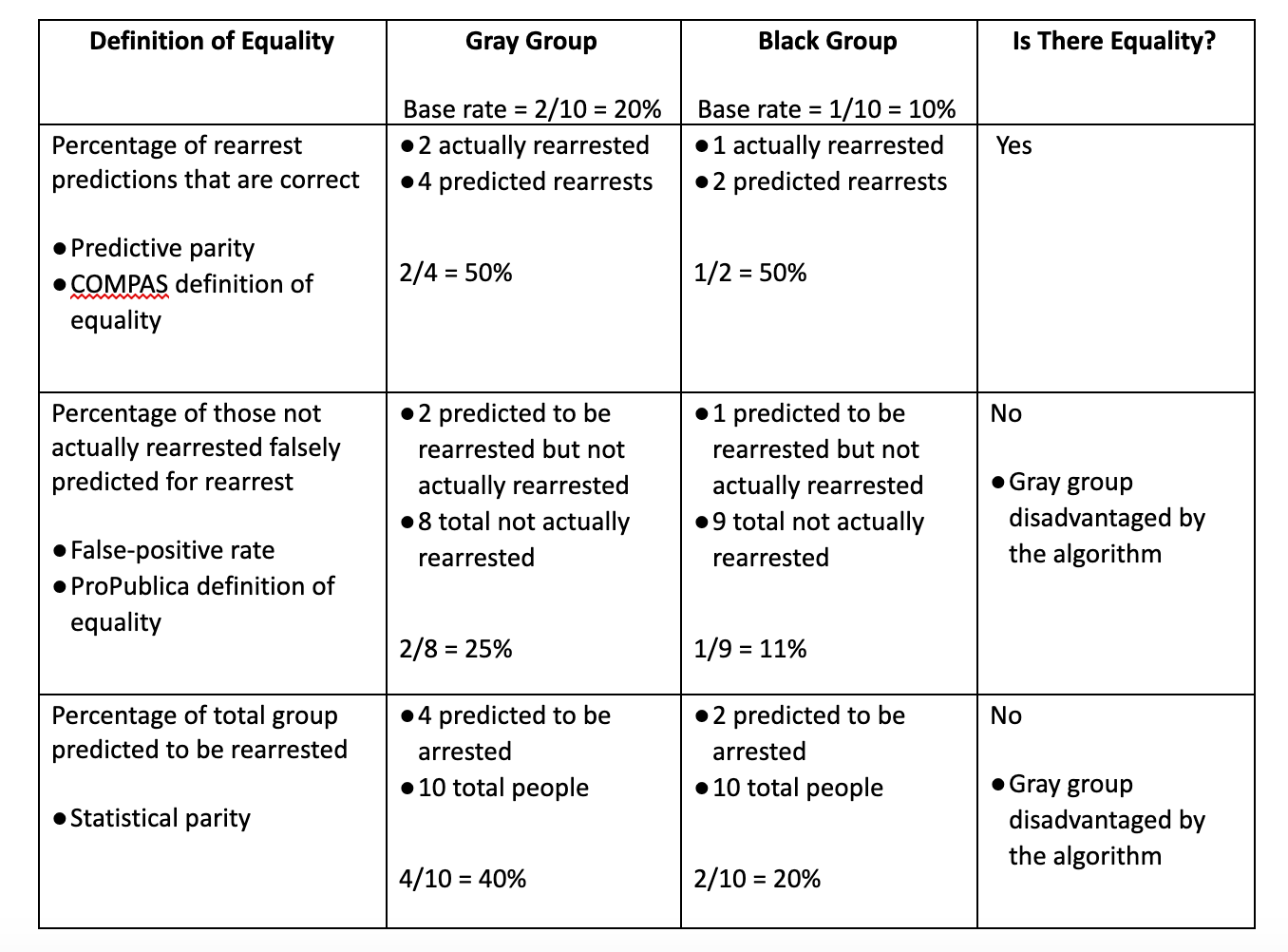 As summarized by Table 3, there are several different definitions of equality. COMPAS used predictive parity while ProPublica used the false positive rate.[14] Using COMPAS’s definition of equality (predictive parity), the COMPAS algorithm treats the Gray and Black groups equally; however, using ProPublica’s definition of equality (false-positive ratio), the COMPAS algorithm treats the Gray group worse than the Black group. That different equality measures produce different results necessarily follows from the fact that the two groups have different base rates.[15]

Beyond the three measures summarized in Table 3, there are many other statistical measures of equality.[16] Interestingly, the Supreme Court has tackled this issue: in Wards Cove Packing Co. v. Atonio, the Supreme Court rejected a disparate impact claim because the wrong statistical measure of disparity had been used to establish a prima facie case of disparate impact.[17] Further, the Equal Employment Opportunity Commission’s 4/5ths rule, which establishes the statistical disparity sufficient for a prima facie disparate impact case, seems to use statistical parity as its measure of equality.[18] Still, as of yet, there is no consensus on what statistical measure to use to quantify equality. But given the increased proliferation of algorithms, a working definition of equality is critically important. This is an active area of research for statisticians, computer scientists, policy experts, and lawyers.

[17] Wards Cove Packing Co. v. Atonio, 490 U.S. 642, 655 (1989) (The Court held that comparing the percentage of nonwhite workers in cannery and noncannery positions was not the appropriate measure of disparity. Rather, the relevant measure was a comparison “between the racial composition of [the noncannery positions] and the racial composition of the qualified . . . population in the relevant labor market.”).