Are Some Federal Circuit Judge-pairs More Likely to Agree Than Others? The Answer is Yes.

At the U.S. Court of Appeals for the Federal Circuit, randomly assigned three judge panels decide cases and controversies.[1] Therefore, a litigator need only persuade two of the three judges (a “judge-pair") to prevail. Are some judge-pairs more likely to agree than others? Yes. Can these differences be used to increase an advocate’s efficiency and effectiveness? Maybe.

The Federal Circuit Data Project (“FCDP”) compiles, inter alia, the Federal Circuit’s panel opinions and orders from the years 2004 through 2021.[2] Using Python[3] and the FCDP, judge-pairs were generated for every recorded panel. For example, a panel consisting of Judges Lourie, Dyk, and Stoll generated three judge-pairs: Dyk-Lourie, Dyk-Stoll, and Lourie-Stoll. Next, each judge-pair was assigned a value of “agree” or “disagree” based on the corresponding opinion or order from said panel. For example, an opinion written by Judge Dyk, joined by Judge Stoll, with Judge Lourie in dissent, resulted in three outputs: {Dyk-Stoll, agree; Dyk-Lourie, disagree; Lourie-Stoll, disagree}. Finally, these outputs were collected and analyzed, with those judge-pairs occurring fewer than 50 times removed to reduce variance from small sample sizes.

Second, there is a slight positive correlation between the number of times a judge-pair occurs and its agreement rate. However, this correlation disappears after approximately 200 panels—where agreement rates become relatively constant, or even, slightly negative.[7] An agreement chart for all judge-pairs is presented in Figure 01. 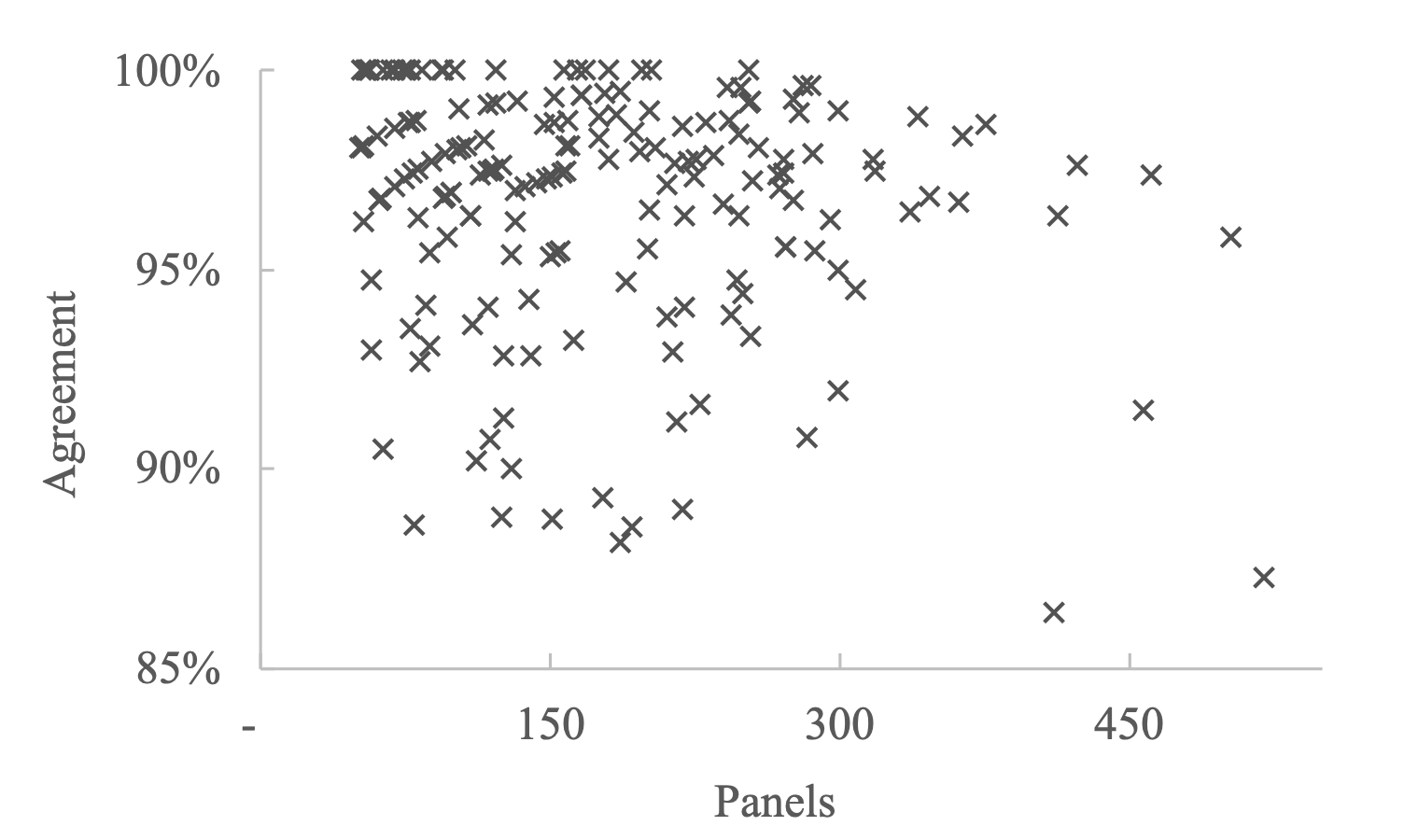 Because the agreement of a single judge-pair is sufficient to prevail, identifying agreeable or disagreeable judge-pairs may provide a competitive advantage by allowing an advocate to—

(1) target legal research to opinions issued by the most agreeable judge-pair on the panel;

(2) target legal research to opinions issued by judges not on the panel, but who form an agreeable judge-pair with an on-panel judge; or

(3) direct argument to an agreeable judge-pair on the panel.

It is 2007, and you are arguing a case on appeal to the Federal Circuit. Your panel consists of Judges Alpha, Beta, and Delta. The relevant judge-pair agreement percentages are presented in Figure 02.

Based on these agreement rates you decide to maximize your efficiency and chances of success by doing the following. First, you focus your legal research on opinions written by Judges Alpha and Beta—the agreeable judge-pair. Second, if no opinions written by judges Alpha or Beta are available, you expand your research to other agreeable judge-pairs containing either Judge Alpha or Beta.[9] See, e.g., Judge Alpha’s agreement chart, Figure 03. Third, you focus your argument on Judges Alpha and Beta. Ultimately, your strategy is effective, Judge Alpha writes the opinion, Judge Beta joins, and Judge Delta dissents. Good thing you read the SLTR blog.

[1] United States Court of Appeals for the Federal Circuit, About the Court, https://cafc.uscourts.gov/home/the-court/about-the-court/ (last visited Feb. 10, 2022)

[4] There are many underlying variables that are not controlled in the above analysis. For example, the FCDP provides data on “topic” which is not considered here. No doubt, partitioning the above analysis by topic would provide more useful results. But for this general proof of concept, I assume that every opinion or order is on the same issue. The same assumptions apply to procedural posture, time on the bench, political climate, etc..

[5] These data contain an asymptote, predicably, at 100%. While a normal distribution is not the most appropriate, it is functionally adequate for this general and preliminary analysis.

[6] I use the term “disagreeable” lightly; the agreement rates are still well above 75%.

[7] Additionally, this general behavior is present when tracking changes in agreement rates of a single judge-pair over time. Judge-pairs appear to settle-in after about 200 panel appearances. However, both behaviors may be the result of dampening by a large number of decisions—thereby reducing the effect of short-term deviations. Further investigation is needed.

[8] This is an actual Federal Circuit case occurring in 2007. The adherence to judge-pair agreement statistics is not an outlier.

[9] For example, you choose opinions written by one of the three judges forming an “agreeable” judge-pair with Judge Alpha and rank other precedent by agreement rate. See Figure 03.