Capabilities of a TRIGA Mk.II Reactor that Columbia Built but Never Fueled

Many many moons ago, in the yonder days of 1960, Columbia University joined dozens of institutions around the nation lining up for federal funding to build research reactors on campus. Due to local concerns and regulatory delays, however, the reactor building and core were finished but never fueled with low-enriched uranium. In 1974, reactor fueling and startup was put on indefinite hold [1]. Today, the facility houses various applied physics projects.

As a former licensed Senior Reactor Operator at a similar, but still active, reactor, I was disappointed to read about Columbia’s choice to never utilize our facility. Not much information exists about it. But today, a new wind is blowing for neutron research, with increasing federal and private funding for new types of reactors and nuclear space propulsion.

Columbia’s contribution in neutron research would have been greatly advanced with an on-campus reactor, like at 25 other top U.S. universities. In this article, we’ll discuss what a university research reactor can do, and two types of unique experiments: neutron activation analysis and neutron radiography.

Columbia finished building a 250 kW TRIGA Mk.II reactor. “TRIGA” (Test, Research, Isotopes, General Atomics) is a medium-sized class of research reactors. With 66 such facilities, it is the most common non-power reactor model found in the world.

The reactor core is a stainless steel cylinder standing at just 1.5 feet wide and 2 feet tall [2]. It is rather petite compared to popular images of massive nuclear plants, and the relative size correctly alludes to its proportionally smaller power.

At its maximum steady-state reactivity, the Columbia TRIGA was planned to produce thermal heat equivalent to 250 kW-- enough to power 200 toasters or a small apartment [1]. However, federal regulations prevent research reactors from producing power. 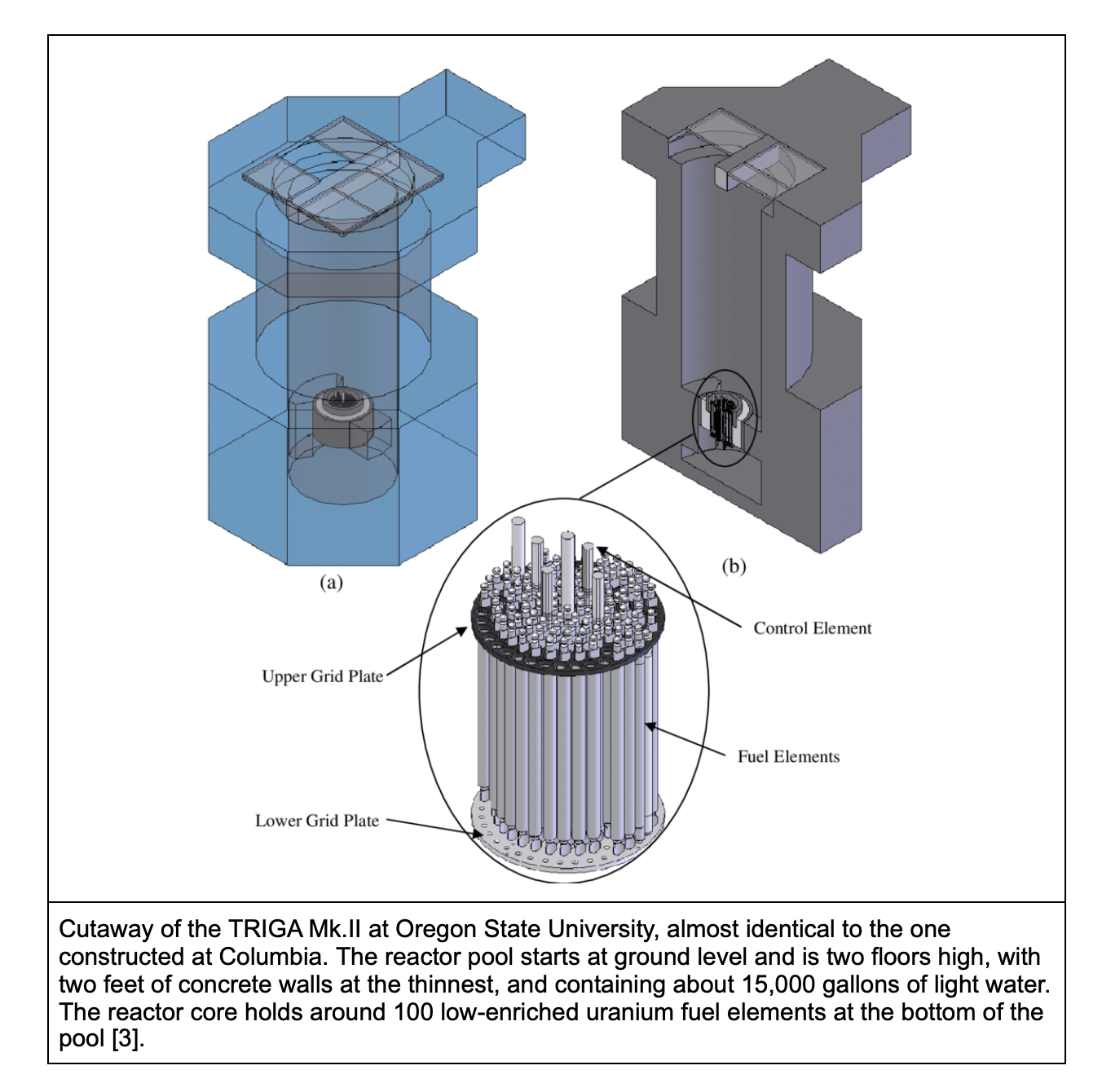 Instead of energy, the power was to be used to produce neutron beams-- tubes radiating outwards horizontally from the reactor core for neutrons to “beam” towards a target sample. With a net neutral charge, neutrons have unique interactions with matter that allow observations of atomic behaviors impossible with any other particles. (Fun fact: neutrons actually do have a charge distribution due to its 3 quarks “inside”).

Without a working reactor, Columbia researchers must seek beam time at other research reactor facilities at MIT, University of Missouri, or the National Institute of Standards and Technology.

Big Flashes of Blue Light: A Feature, Not a Bug

The most visually stunning feature of a reactor is that during normal operation, the core glows light blue. This is from Cherenkov radiation. Electrons emitted from underwater radiation actually travel faster than light, which is about 75% of the speed of light in a vacuum (much to Einstein’s relief). Much like breaking the sound barrier, breaking the light barrier produces a “sonic boom” of high-energy photons. Our eyes can only see some of those high-energy photons as white and blue light. 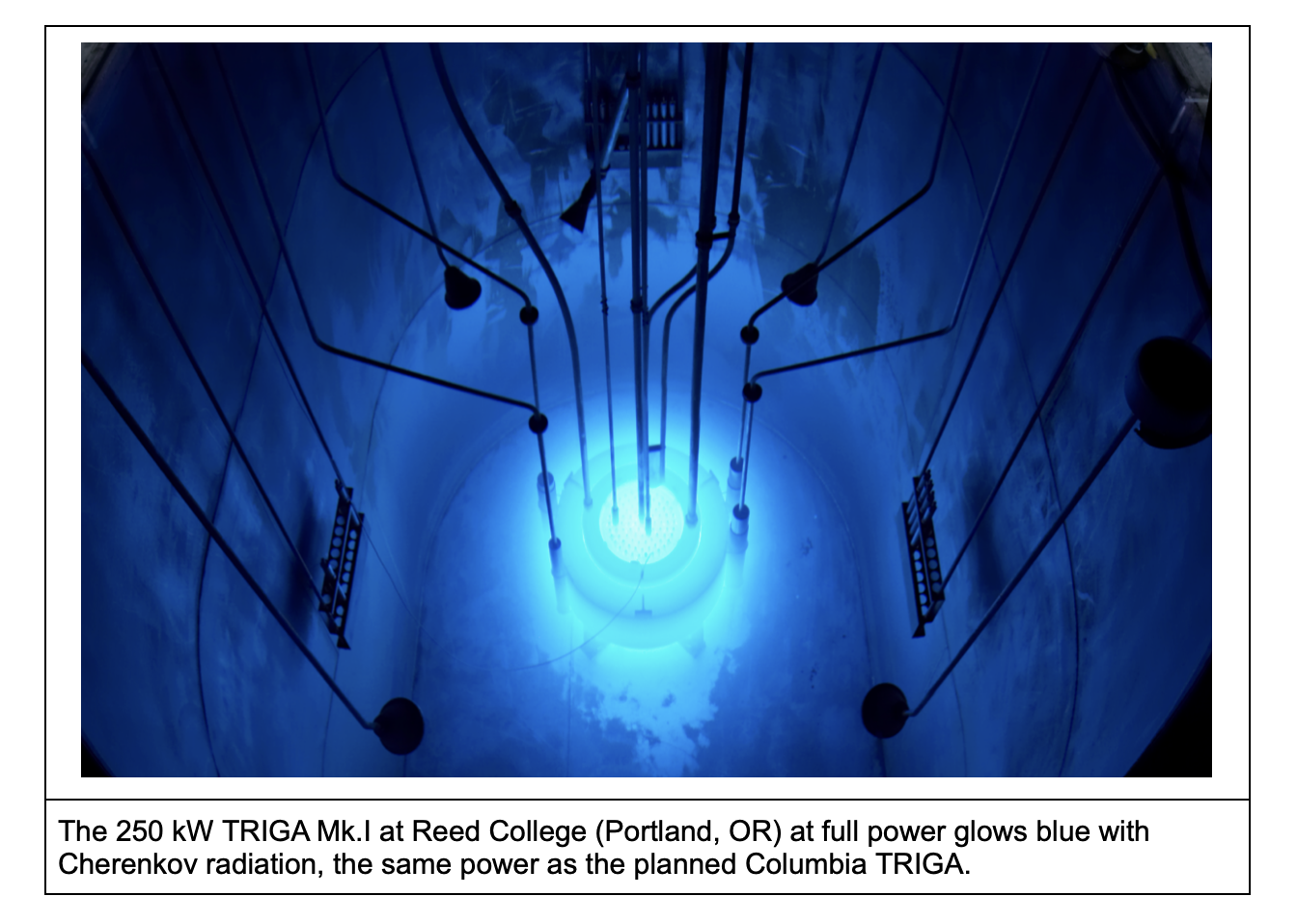 Despite its small size, the Columbia TRIGA was designed to produce quick bursts of a huge amount of neutrons, allowing very high-quality neutron beam resolutions (think more pixels per area, but more neutrons hitting per volume of sample).

This is done by “pulsing”. By pneumatically ejecting a control rod, which otherwise limits the rate of fission in the core, reactor power spikes from 0 to about 1.1 GW for 30 milliseconds  (producing 2.5 quintillion (2.5e+18) neutrons), and then shuts down right away.

Going from shutdown to 1.1 GW and then back to shutdown in just 30 milliseconds is incredible [8]. You can see one on YouTube here. (Even as a former TRIGA Senior Reactor Operator, it still amazes me that we can do this at TRIGA reactors!)

You might think it’s dangerous, it’s impossible for a TRIGA reactor to have an uncontrolled, runaway fission reaction. When pulsing, after 30 milliseconds, the fuel gets sufficiently hot to actually stop fissioning by itself.

Neutrons are blocked by light elements (like hydrogen), and fission only occurs with slow neutrons because fast neutrons bounce off (“scatters”). TRIGA fuel utilizes these special properties by mixing in an equal mass of hydrogen as uranium [9]. This type of fuel is called hydrided uranium. As soon as uranium starts fissioning, hydrogen actually begins bouncing away neutrons, fighting fission from occurring. Over decades, uranium-235 fissions away, but the hydrogen still stays there. This means fission in TRIGA reactors is highly handicapped and inefficient, but safe.

Not utilizing the TRIGA reactor means that Columbia researchers lack an institutional source of neutrons needed to conduct physics and materials science research. One example experiment, neutron activation analysis, is an important method of determining exact identities and amounts of chemicals in the smallest unknown samples.

By irradiating an unknown substance in a research reactor, the substance is bombarded with neutrons, inducing radioactivity. We then take the sample out of the reactor and measure the photon radiation energies emitted from the now-radioactive substance. Every isotope, when irradiated, releases a photon with a unique characteristic energy [4]. By cross-referencing the measured energies and their frequencies, exact masses of isotopes can be identified in the sample, with an accuracy down to about 0.1 micrograms. This process is called neutron activation analysis (NAA).

Following President Kennedy’s assassination, the FBI sought to prove that Oswald had matching gunpowder traces on his hands as on the bullets. However, the small chemical traces were used up in chemical analyses, which were inconclusive. [5]

With only 50 milligrams of sample left, the FBI then reached out to the TRIGA reactor at UC Irvine. Using NAA, the UCI TRIGA successfully irradiated and proved that Oswald had fired a rifle whose bullets pierced through President Kennedy and Governor Connally [6]. The U.S. House of Representatives report later declared NAA “the queen of physical evidence” [5].

We often use X-rays to see-through materials-- from teeth to bones to our airline luggage. But while X-rays are blocked by high-density materials, neutrons are actually blocked by low-density materials [4]. So, medical purposes favor X-rays as organic compounds are built of lighter nuclei like carbon, nitrogen, and oxygen. On the other hand, industrial purposes require neutron radiography, or N-rays, that pass through heavier metal compounds, like titanium and steel.

The neutron beam lines at existing TRIGA facilities are often used by materials scientists to observe internal components, stresses, and fractures in a non-destructive manner, as samples do not need to be disassembled or otherwise “cut apart” in this type of examination.

Neutron beam lines, like radiography or small angle neutron scattering (a similar but a super high-quality atomic-level analog), are high in demand in the United States. In just a 6-month window in 2019, NIST received a record 451 experiment proposals with 2.5 times more days of beam time requested than available [7].

Despite the decline of nuclear research in the 1990s, a resurgence crossed the horizon with the revitalization of small modular reactors and nuclear-powered space exploration. Federal funding and private investments are flowing into reactor startups. In July 2021, the University of Illinois formally applied for a new license to build a Small Modular Reactor on campus.

University research reactors provide a unique, unparalleled resource for students to gain practical nuclear science experience that is otherwise limited to textbooks or sequestered power plants. A TRIGA reactor provides a long list of scientific capabilities that are difficult to replicate with any other apparatus. This article provides just a small peek into what-could’ve-been nuclear research capabilities at Columbia University. Hopefully, one day, Columbia students can participate in this new era of neutron research.