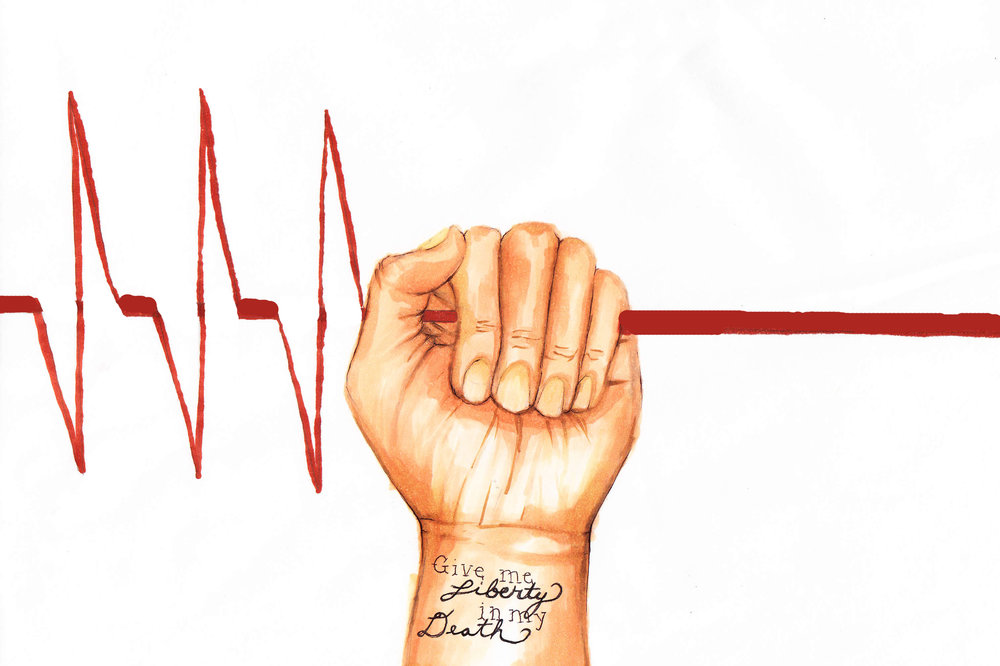 The question of whether or not the terminally ill should be granted an institutional right to die rose to the forefront of the national consciousness recently, due in large part to the efforts of the late Brittany Maynard. Diagnosed with untreatable brain cancer, Maynard decided to end her life last fall in Oregon, where state law permits physician-assisted suicide.[i] In an editorial for CNN, Maynard wrote: “having this choice at the end of my life has … given me a sense of peace during a tumultuous time that otherwise would be dominated by fear, uncertainty, and pain” (“My right to death with dignity at 29”). Having the option to end her life gave Maynard back her sense of agency, and allowed her to die on her own terms.

Laws like Oregon’s Death with Dignity Act are not without their critics, however. Prominent among them is philosopher J. David Velleman, who makes a case against these laws in his essay “Against the Right to Die.” Velleman challenges those—like Maynard—who claim that state-sanctioned assisted suicide can preserve the dignity of the terminally ill. He claims that dignity and autonomy are intertwined in such a way that someone lacking dignity also necessarily lacks the ability to rationally choose suicide. Velleman also argues that the presence of an institutional right to die places an undue pressure on the terminally ill to exercise such a right. In this essay, I will argue that Velleman’s first claim does not adequately account for the ability of rational adults to make binding decisions about their future selves. I will also argue that while Velleman’s second concern is valid, it is not a sufficient reason to oppose legislation like the Death with Dignity Act.

Velleman’s initial claim hinges on the concepts of dignity and autonomy—specifically as defined by Immanuel Kant in his ethical writings. In The Groundwork of the Metaphysics of Morals, Kant claims that a person’s dignity is predicated upon his ability to make autonomous decisions and, more specifically, by his ability to use reason (Kant 48, 43). Assisted suicide, Velleman claims, is only morally permissible in situations where one’s dignity is compromised andwhere one is able to rationally choose to die. Based on Kant’s definition, though, if a person is able to rationally determine that he wants to die, he must necessarily still have his dignity—due to his ability to exercise reason. It also follows that if a person lacks dignity, he must also lack the ability to rationally choose suicide. Therefore those without dignity (who would be justified in choosing death) should not be allowed to do so even if they so choose, as they are not doing so rationally. On the other hand, those who are able to rationally choose suicide lack the grounds to do so as they still possess their dignity (Velleman ).

This argument, that all instances of assisted suicide are either irrational or unjustified, ignores the ability of human beings to make binding decisions regarding their future selves. Velleman assumes that the terminally ill patient must choose whether he will live or die ‘right then and there’ at his moment of greatest suffering—which is unrealistic. Maynard, for example, decided to end her life well before her illness robbed her of her dignity or autonomy; but she did so in confidencethat it inevitably would. She wrote: “Because the rest of my body is young and healthy, I am likely to physically hang on for a long time even though cancer is eating my mind … and my family would have had to watch that” (Maynard, “My Right to Death with Dignity at 29”). In Maynard’s case, suicide was a prophylactic measure, ensuring that her dignity and autonomy remained intact for the remainder of her life.

Velleman could claim that Maynard represents a special case, in that she was forewarned about what was to come—but what about those who suddenly fall ill? A sudden stroke or head injury could steal away one’s capacity to reason in seconds, and with it, the ability to rationally choose death. Surely euthanasia would not be justified for these patients, even if they requested it. In these cases, however, it is informative to consider advance directives—a commonly employed legal device that allows people to decide ahead of time whether or not they want specific life-saving interventions, like CPR or intubation. It is not a stretch to imagine these directives being expanded to include a clause that calls for euthanasia in certain circumstances—such as a devastating but not-immediately-fatal illness or injury. Again, in this situation, the person signing the advance directive is in full possession of her faculties, an adult making a binding decision about her future—just as Maynard did.

Next, Velleman argues that institutionalizing the right to die has a coercive effect on the terminally ill. Such a right, he says, exerts an unwelcome pressure on the dying to justify their continued existence. The presence of this option, he says, deprives the terminally ill of the ability to “ the status quo without choosing it” (Velleman 84). In other words, an expectation of continued existence is currently the norm for these individuals. Once a law permitting physician-assisted suicide is in place, that is no longer the case—these patients could be held accountable for their decision to continue living, and be required to justify it. Thus, when the state gives a human being the institutional right to die, it also forces her to actively justify her existence (86).

This is a valid concern. Brittany Maynard and her family moved to Oregon from California in order to take advantage of the Death with Dignity Act. This fact, as well as her outspoken activism in favor of assisted suicide for the terminally ill, makes it clear that she was not acting under duress or out of guilt when she took her own life. However, for people living in places where physician-assisted suicide is already legal, things are not so clear-cut. They may, as Velleman fears, feel forced to give reasons for not ending their lives. Considering the financial and emotional strain their condition may cause their loved ones, some may find this difficult to do.

Nevertheless, these concerns are not insurmountable. In Oregon, patients like Maynard must follow an extensive protocol, which includes multiple physician visits and (at their doctor’s discretion) a psychological examination.[ii] As such, those who take advantage of the Death with Dignity Act must make a strong and concerted effort to do so—minimizing, if not eliminating, the concern that these patients are being called on to justify their continued existence. On the contrary, they are asked—again and again—to justify their decision to end it. Still, it’s crucial that these safeguards be included in any future legislation that provides a legal avenue for assisted suicide.

Velleman’s view of the terminally is, ultimately, paternalistic and condescending. Furthermore, it reflects a larger tendency in America to view these individuals as frail, helpless, and confused, rather than as adults capable of making important decisions. Brittany Maynard’s advocacy highlights our need to cast off this fallacious outlook. “Who,” Maynard asked, “has the right to tell me that I don’t deserve this choice?” The dying are already forced to give up so much. To return to them a measure control over their lives is an act of compassion that we as a society ought to take.

[i] The Oregon Health Authority uses the term ‘physician-assisted suicide’ to refer to the practice of “ending life through the voluntary self-administration of lethal medications prescribed by a physician for that purpose” ("Frequently Asked Questions About the Death with Dignity Act.").

Casimir Klim is the winner of the 2015 Voices in BioethicsEssay Contest, in which undergraduate students nationwide submitted an opinion-editorial on a current bioethics issue of choice. In fall 2015, Casimir received his Bachelor of Arts in Philosophy at Columbia University’s School of General Studies. Before coming to Columbia, he worked as a firefighter and paramedic, which led to his interest in medicine. In 2016, he will apply to medical school and work as a research assistant in the Columbia Department of Psychiatry.