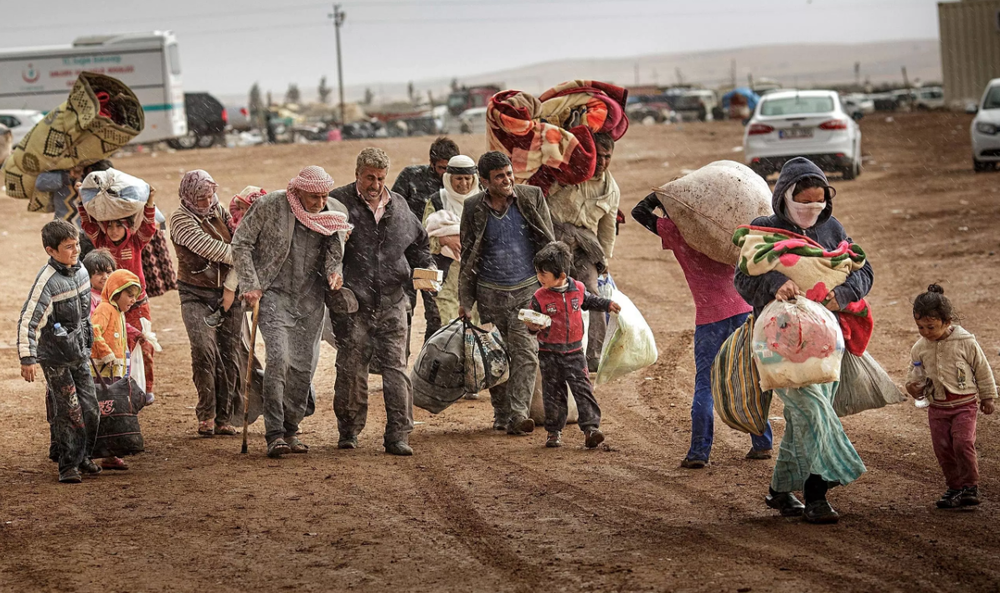 Some years ago, I had the opportunity to travel to Damascus, Syria, as part of aziyarat, a pilgrimage to visit some of Shi’ite Islam’s most holy shrines. While I have had the good fortune to travel extensively in the developing world, I remember being acutely attuned to the great poverty that I was surrounded by in Syria. Each and every time I stepped out of our luxury hotel, I felt guilty that while I was cocooned inside my well-ventilated air-conditioned hotel room, many more lay in deep poverty at the door of that very hotel. I also noticed that in the area of Sayyeda Zainab, a largely impoverished neighborhood, there appeared to be a disproportionate number of people suffering from various ailments, ranging from amputated limbs to gravely emaciated figures. I was deeply perturbed by this experience, and recall speaking with a local, asking him why so many looked undernourished and generally unhealthy. Charmingly witty, and with a peculiar sense of optimism, he replied, “My country doesn’t value me the way your country values you.” And then he laughed, as if he was simply stating a fact that he had grown accustomed to. Today, the neighborhood of Sayyeda Zainab has been largely destroyed, and many of its inhabitants make up the exodus of refugees seeking home elsewhere. In searching for new homes, these refugees require not only an open door to enter through but also systems that can cater to their burgeoning and urgent needs. To tend to the health needs of this population, countries should absorb refugees into existing national healthcare systems, providing necessary services to a displaced, desperate people. That is certainly the most basic, appropriate, and ethical means of assimilation.

The health care challenges attached to this recent crisis cannot be handled uniformly within all nations. It appears that wealthy, industrialized western countries can play a large role in settling refugees and providing adequate access to basic healthcare. However, even among these nations, the provision of healthcare services is often at philosophical and practical impasse. Countries such as Canada and the UK adhere to the belief that healthcare, if it can even be considered a good, is truly a “special good” that should be universally accessible regardless of ability to pay. On the other hand, the United States largely abides by the principle that healthcare is a market-driven good, and not a universal right. And on the other end of the spectrum are developing countries that do not have sophisticated healthcare systems largely because they lack the financial means. It is within this complex, incongruent, and disparate global “health system” that the refugee crisis is unfolding.

According to an Amnesty International report published on February 3, 2016, more than 4.5 million Syrian refugees have entered the countries of Turkey, Lebanon, Jordan, Iraq, and Egypt; Turkey has taken more Syrian refugees than any other country in the world, Lebanon hosts the equivalent of approximately 25 percent of its national population, Jordan hosts the equivalent of 10 percent of its national population, and Iraq hosts 245,022 Syrian refugees while contending with 3.9 million internally displaced Iraqis.[1] Arguably, a number of these countries do not have adequate health systems for even their national citizenry, and certainly do not have the ability to provide necessary healthcare provisions for the overwhelming influx of refugees. Instead of further burdening already strained health systems, the international community needs to provide aid in the resettlement of refugees in these regions, with a primary focus on attending to the healthcare needs of this population. Our response rate to the overall Syrian refugee crisis has been dismal, with the UN’s humanitarian appeal for 2015 funded at only 61 percent.[2] If countries sincerely took on the burden of providing adequate funding, the humanitarian crisis, as well as health crisis, that is surmounting can be managed more effectively.

Turning to western nations, while clear doctrinal issues may exist with respect to access to healthcare, because of the humanitarian crisis at hand, basic healthcare provisions should be provided to the refugee population. This does not necessary imply that a permanent two-tier health system should exist, but simply that a temporary catering to this extremely disadvantaged population is only appropriate. In countries that have not adopted universal healthcare, critics may legitimately argue that such a system would deprive nationals of healthcare services while favoring a refugee population. This argument is difficult to counter, but a response may be that the humanitarian crisis is so grave that it would be unconscionable not to provide such basic healthcare. Alternatively, countries should pay into an international fund that can disburse healthcare dollars to countries that choose to host refugees, thereby not impinging directly on financially strapped or inadequately developed national healthcare systems.

The challenges to integrating a refugee population appear less complicated in nations that already subscribe to universal or nationalized healthcare. Perhaps we simply need to look further up (both literally and, arguably, figuratively) to find an example of an appropriate response to the Syrian refugee health crisis. On February 18, 2016, Canada’s Liberal government announced that all refugees will have the same access to healthcare that all Canadians enjoy. Such a bold pronouncement is more palatable under the Canadian healthcare system, where all Canadians are guaranteed healthcare (as determined at the provincial level); making the extension of healthcare to a refugee population, while presenting questions of cost and burden, is therefore logistically less challenging.[3]

By affording Syrian refugees a basic level of healthcare, host countries are also safeguarding the health and security of their citizenry. Refugee populations expose countries to a host of communicable and non-communicable diseases, and it is therefore in the national best interest to address the health requirements of a large refugee population to prevent the spread of disease. Additionally, if a sustainable mechanism is not in place, the refugee population may seek urgent care in the emergency rooms of hospitals, further driving up the cost of healthcare. In light of the trauma that the Syrian refugees have sustained, it is highly probable that mental health services also need to be furnished. While this may seem unduly burdensome on a host country, the long-term benefits of successfully integrating a refugee population certainly outweigh potentially isolated and mentally impaired individuals posing a very real threat to themselves, others, and national security.

Those opposed to providing basic healthcare services to this refugee population may argue that such an endeavor is cost- and resource-prohibitive. However, the alternative of not providing basic health services would be more detrimental and costly, not only in very real financial terms, but also in terms of threats to human health and safety. It may be argued that the proposal is simplistic and does not take into consideration the complexities that are inherent to varied health systems. Yes, certainly complexities exist, but integration of refugees into existing health systems does not necessarily require revamping health systems, but instead providing room for refugees to emerge within those health systems. Others may argue that healthcare was not adequately provided to this population when they were in Syria, and therefore they should not be afforded anything more as refugees. This argument fails on at least two fronts. First, under the United Nations High Commissioner for Refugees (UNHCR), “A refugee has the right to safe asylum. However, international protection comprises more than physical safety. Refugees should receive at least the same rights and basic help as any other foreigner who is a legal resident, including freedom of thought, of movement, and freedom from torture and degrading treatment.”[4] Second, by promulgating a separate substandard for refugees, the host country will be complicit in perpetuating a systemic inequality, heightening tension and encouraging further alienation of a population that it hopes to integrate.

Earlier this year, I attended the World Leaders Forum at Columbia University, where His Excellency Sergio Mattarella, the President of the Republic of Italy, somberly noted, “On the issue of refugees, Italy is defending a need.” That is exactly what we need to do—defend the needs of those most vulnerable today. Thereby, national governments will continue to uphold the long-standing principles of beneficence and justice, while safeguarding fundamental human dignity. Our international system of governance is founded on noble words, such as those imbedded in the United Nations’ Universal Declaration of Human Rights and other lofty texts that speak to our better selves. Notions of “never again” rally us to our larger goals as a human population, often rooted in age-old iterations of maxims like the Golden Rule. Today, it is essential that we transcribe the spirit of these words to the health crisis that Syrian refugees are facing. Integrating healthcare provisions for a refugee population gives voice and credence to our collective aspirations. National healthcare systems should responsibly absorb the healthcare needs of refugees, with the necessary international support and funding. The efforts may take some time, but they are nonetheless critical not only to refugees, but also to our collective well-being. If I were to ever meet that witty Syrian local again, I hope that I can say—with an optimism that I have grown accustomed to—that “my country not only values me, but it also values you.”