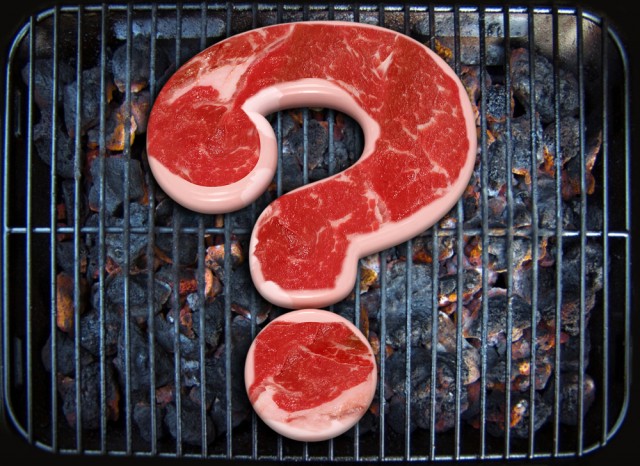 Long gone are the days of hunting and gathering food or raising our own livestock.  The first time American consumers see their food is usually on a supermarket shelf or a restaurant plate. It’s easy to not consider what goes into the preparation of milk, eggs, or pork chops. For meat in particular, the path from the source is not only bloody and unsanitary, but also terrible for the environment.

In August 2013, a historic milestone was achieved: the first public tasting of in vitro meat (IVM).[i] IVM is exactly what it sounds like: meat created by humans in laboratories. While this technology is still very much in development, this meat is created by painlessly harvesting stem or muscle cells from a living animal, and developing these tissues in a culture until edible meat is produced.  If the medium used to create IVM is not Fetal Bovine Serum, scientists could theoretically prepare meat without having to kill, or even harm, a single animal.

Continued research and development of IVM and related technologies is morally imperative for ethical, environmental, and health reasons. The reasons this emerging technology gets an ethical thumbs-up are at once obvious and nuanced. For one, producing meat in this way does not necessitate the killing of an animal, instead requiring only taking a sample of cells from them. Some might raise an eyebrow that harvesting these cells might still cause a pig or a cow pain or distress; however, that may not even be the case. It has been claimed, for example, that merely 10 pork muscle/stem cells could yield up to 50,000 metric tons of pork product.[ii] Even if a completely harmless method of cell harvesting is not able to be used, surely a small biopsy on a few, healthy animals in humane conditions would be preferable to the inhumane and egregious conditions faced by animals in factory farms, where many live a tortured existence and subsequently get slaughtered by the scores.  Even prominent vegetarians such as Peter Singer appear to be excited by the idea of trying IVM, claiming that being a vegetarian or vegan is not an intrinsically valuable activity, but rather an instrumentally valuable one in light of the end goal of minimizing human and animal suffering. On this view, the introduction of IVM would allow those who are currently vegans and vegetarians a way to partake in meat consumption without supporting the suffering of animals.[iii]

There are additionally salient, environmental concerns at play here that give even more impetus for pursuing IVM.  Currently, 30% of the world’s arable land is covered by pastureland for animals, while only 4% is used to directly feed humans.  The total biomass of livestock on earth is currently double that of humans and uses 8% of global available freshwater.  Not to mention, 18% of greenhouse gas emissions are due to livestock production, which makes livestock a bigger contributor to global warming than all transportation occurring on the planet combined.[iv]  IVM cuts down substantially on land use, water use, and greenhouse gas emissions when compared to conventional methods of beef, sheep, pork, and poultry production. In addition, IVM takes less energy to produce than beef, pork, and sheep, but slightly more energy input than poultry production requires.  IVM also has potential conservational benefits: animals who are over hunted or fished could see cuts of their meat grown in labs, potentially decreasing the hunting of that species.[v]

Concerns about our health would also lead us to embrace this technology as well.  Conventional beef production is associated with Salmonella, E. coli, Mad Cow Disease, and other potentially harmful pathogens.  Pursuing IVM production over traditional methods of meat production entails less human-animal contact.  In this way, IVM production could help mitigate the spread of zoonoses to humans, and the sterile laboratory environment where IVM is produced should also help to mitigate food-borne illness.[vi] Moreover, the use of antibiotics in livestock has been identified as a potential source of antibiotic-resistant bacteria, and the introduction of IVM might diminish the evolution of these strains of bacteria.[vii] Additionally, thanks to advancements in tissue engineering techniques, the fat and nutritional content of IVM can be modulated. This might include fortifying meat with omega-3 fatty acids, adding certain vitamins, modulating the polyunsaturated fat content, and supplementing the meat with rare, but necessary, micronutrients such as iron and zinc.[viii] In this way, it seems as though IVM offers opportunities to augment the nutritional content of our own food and to produce meat in a way that minimizes the potential for disease.

Critics of IVM often argue against this technology on the grounds that it is unnatural.  It appears, however, that this criticism fails under scrutiny.  For one, humans regularly consume foods that are unnatural to some degree. We regularly consume GMOs, pasteurize our dairy, and enjoy heavily processed foods like cheese whiz. Even traditional delicacies, like Foie Gras, are created by forcing “unnatural” circumstances on animals such as force-feeding geese by gavage.  Judging from these everyday examples, it appears we have good reason to reject objections to this technology that are based on its purported “unnatural” state. Others argue that the technology is simply too expensive to be economically viable. Up until recently this was true: the patty tasted in August 2013 cost over £200,000 GBP.[ix] The steep price tag appears on the cusp of rapid decline, however, as Dr. Mark Post, a scientist at the University of Maastricht researching IVM, claimed in 2015 that he managed to get the cost of his IVM production down to about $11 USD per beef patty.[x] Skeptics might additionally point to concerns with the possible taste of the meat or the fact that as of 2014, only one in every five Americans was willing to try meat grown in a lab.[xi] This being said, however, most who have had the opportunity to taste these products have said they were hardly different from the taste of real meat,[xii] and public concerns regarding the technology could be overcome with adequate safety testing, regulations, and education.

Thus, IVM is but one promising technology emerging from the field of tissue engineering that demands further action. Pursuing IVM is necessary out of concern for the environment, the protection of animals, and our own wellbeing. Pursuing IVM will allow humans to continue their long-standing eating habits while catalyzing positive changes for the environment, sparing countless animals suffering and death, and potentially improving our own health.  If we as humans are not willing to give up meat consumption altogether, it appears that pursuing IVM is a moral obligation; after all, why not, when you can have your meat and eat it too.