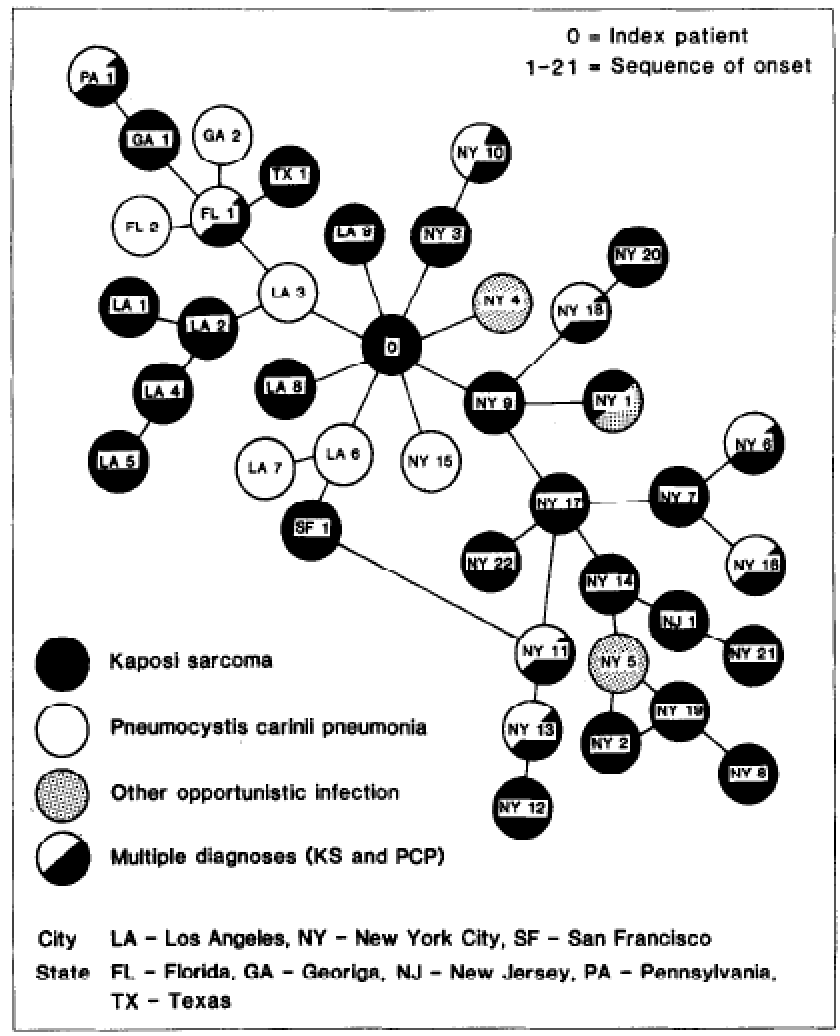 In 1987, Harry Reasoner of 60 Minutes questioned Dr. Selma Dritz about her search in the early 1980s for the origins of the deadly outbreak of AIDS in the United States. “It was the whodunit of the century, and I was born nosy,” she tells him. The title of the 60 Minutes piece was “Patient Zero” who Mr. Reasoner explains “was a man – a central victim and victimizer” in the spread of AIDS.  Dr. Dritz, who had been the head of infectious diseases in the San Francisco branch of the Centers for Disease Control and Prevention (CDC), recalled warning Patient Zero of the danger he posed to others. In her retelling, Mr. Dugas callously rebuffed her concerns, showed little remorse for infecting others, and concluded their interaction with “screw you.” Also interviewed was Randy Shilts whose book, And the Band Played On, identified Patient Zero as Gaëtan Dugas, a Canadian flight attendant. Mr. Shilts explained that Mr. Dugas constituted what epidemiologists today call a superspreader – someone with unlimited ability to infect others and “speed this disease into every corner of America.”  The narrative of a villainous foreigner maliciously spreading a deadly epidemic culminated in an infamous New York Post headline condemning Mr. Dugas as “THE MAN WHO GAVE US AIDS.”

The story unraveled upon closer inspection.  In 1984, the CDC had indeed identified a “Patient O” who had sexual connections with other AIDS patients, but the “O” stood for “Outside” California. Nowhere in the study is “Patient O” identified as “Patient Zero” -- i.e., the person who introduced the virus in America. In 2007, an article in the Proceedings of the National Academy of Sciences concluded that HIV traveled from Africa to Haiti and then on to the US sometime in 1969, many years before Mr. Dugas became infected. On October 26th of this year, the story was conclusively debunked in a study published in Nature. The authors “recovered the HIV-1 genome from the individual known as ‘Patient O’ and found neither biological nor historical evidence that he was the primary case in the US….”  The mainstream media rediscovered the story with the New York Times writing that “the alleged ‘Patient Zero’ of the American AIDS epidemic – a French Canadian flight attendant named Gaëtan Dugas, who died of AIDS in 1984 – was exonerated last week.” Dr. Dritz’s description of the epidemic’s origins as a “whodunit,” as well as Mr. Reasoner’s characterization of Mr. Dugas as a “victimizer,” embody culpable language, reflecting the difficulties of balancing the need to identify “index cases” as they are known in epidemiology with the ethical considerations of patient privacy and justice.

As discussed by Ronald Bayer and Amy Fairchild in The Genesis of Public Health Ethics, the AIDS epidemic triggered a rethinking of ethics in public health. Hard fought battles for privacy and civil liberties had been won by the gay community, and the traditional epidemiological methods of mandatory case reporting by name, contact investigation and quarantine were perceived as threats to those gains. Consequently, public health measures emphasized education to change cultural behavior, the protection of individual privacy, and a rejection of  coercive measures in favor of voluntary testing and counselling of those infected and at risk.

Richard McKay, a co-author of the Nature study, has questioned whether the notion of a “patient zero” is itself a fallacy that overshadows structural factors that contribute to the spread of disease such as cultural inequalities and barriers to health care and education.  Containing an epidemic is far more complex than hunting down the person who may have spread the disease initially. David Heymann, an infectious disease epidemiologist at the London School of Hygiene and Tropical Medicine, confirms that locating a patient zero is only useful if they are still alive and infecting others: “And more often than not, especially in large disease outbreaks, they’re not.”

The modern healthcare response to epidemics aims to respectfully and ethically limit exposure and, when necessary, alter societal behaviors that may spread disease, but the Gaëtan Dugas case demonstrates that the media and the public may focus unduly on blaming the behavior of individuals. The overwhelming media attention on Dr. Craig Spencer and nurse Kaci Hickox during the Ebola crisis are more recent examples. Many also believe that policymakers have over-reacted to the public’s fears of the individual, malicious AIDS infector: 32 states have criminalized the spread of HIV.

The search and public identification of a “patient zero” risks stigmatizing and traumatizing individuals, and alienating those who may be infected from coming forward. The exoneration of Patient O is a reminder that the management of an epidemic must be met with a determination to protect the privacy, liberty and just treatment of individual patients.