Michel Tuffery produced Pisupo Lua Afe (Corned Beef 2000), an entirely metal artwork, in 1994 for an exhibit in Wellington, New Zealand. The piece is one of several metal bulls Tuffery has created; another, Povi Christkeke, Tuffery created to be included in a parade that included Samoan drumming and dancing, a celebration that involved several such bulls moving on wheels down the streets. Lights and fireworks also illuminated the works in a simulated “bullfight” (Hay 2). Both works stand life-size, bulls made completely of red and yellow flattened metal cans. The labels on the cans read “Corned Beef” and Tuffery has aligned the silver metal lids to outline the bull’s face and hooves. The word pisupo arose from the initial tinned product brought to New Zealand mid 20th century, pea soup, but the word now specifically implies canned meat. The tinned food is sometimes given as a gift at celebrations (Lythberg 3). Tuffery, a New Zealander of Samoan, European, and Rarotongan ancestry, has worked in the past to synthesize traditional tapa cloths, sculptures or carvings, with contemporary drawings and figuring.

In her writeup for the Christchurch Art Gallery in New Zealand, where Povi Christkeke resides, Jennifer Hay interprets Tuffery’s piece as a “wry socio-political message” concerning the place of foreign imported goods in Samoa as part of the larger presence of colonialism in the Pacific Islands (2). The introduction of canned foods contributed to a change in the diet of Pacific Islanders, and Hay describes a resulting “decline in indigenous cooking skills” (Hay 2). She states that Povi Christkeke also touches on the “impact of global trade and colonial economics imposed upon the Pacific Island culture and environment” (Hay 2). Hay closely ties dietary and economic changes to a loss of traditional culture. While Hay’s interpretation makes the power dynamic clear, Povi Christkeke is not so explicit. In using the literal cans of beef, Tuffery may be depicting a change in the dietary lifestyle, but he does not provide us with answers to what it means on a cultural level. Tuffery’s subtlety propels us to examine the relationship between the pre-colonial Samoan culture and influence of foreign colonialism.

In “Arts of the Contact Zone,” Mary Louise Pratt explores what happens when cultures intersect, whether on a linguistic, colonial, or ethnic level. She draws on examples that vary as widely as her son’s discovery of the world through baseball cards to a seventeenth-century letter written by an indigenous Andean to King Philip III of Spain. Pratt pulls these disparate sources together to define contact zones as “social spaces where cultures meet, clash, and grapple with each other, often in contexts of highly asymmetrical relations of power” (34). Guaman Poma’s 1613 letter, modeled on a typical Spanish “Nueva coronica ‘New Chronicle’” of conquest, delivers, in a European colonial genre, a novel trajectory of the story of the Creation of the world. Poma seeks to rewrite the history of the Christian world, but with “Andean rather than European peoples at the center of it—Cuzco, not Jerusalem” (Pratt 34). Poma also alternates between Spanish and his native Quechua. Throughout the piece, he replicates, substitutes, reverses, and creates anew. Poma grapples with how colonialism has attempted to define his world, as he stands at a crossroads of cultures.

Just as Poma’s letter is undeniably a purposeful culmination of components, so too are Tuffery’s bulls. Pisupo Lua Afe and Povi Christkekeare themselves contact zones. Their multi-layered construction forces us to consider their different parts—the physical tins themselves, their spatial arrangement, Povi Christkeke’s dance through the parade—in their own right, but also in the narrative of Samoan history. In synthesizing a new form of communication, Poma sought to redefine the order of the colonial world. Pratt discerns that it is not merely the content, but also the structure of Poma’s letter that enabled him to speak so clearly of reconstructing history to include indigenous Andeans. By using the Spanish genre of the chronicle as a vehicle for his own original content, Poma comments on what this genre means in itself. Pratt asserts that Poma’s letter is autoethnographic, “a text in which people undertake to describe themselves in ways that engage with representations others have made of them” (35). Poma responds to a genre that, up until this point, was a one-way depiction of the colonized world by the colonizer. Now he works within this medium itself to push back against this colonial characterization, creating a two-way dynamic.

What then is Tuffery’s purpose in arranging his multi-dimensional pieces? Can we consider the tin cans of Tuffery’s bulls as themselves a language, one that began as cheap, processed products for consumption? Tuffery uses a well-known object as his ‘genre,’ but expresses something new. By using cans of corned beef in the bulls and in the parade, Tuffery is asserting that these foods now have a place in the realms of boisterous celebration. Is it therefore appropriate to see the canned food as parallel to Poma “using the conqueror’s language” (Pratt 35)? By considering the bulls in this light, we imply corned beef in Samoa is representative of some unequal balance of power because it was in a way indirectly ‘forced on’ the Samoan people. Before we commit to seeing Tuffery’s works through Pratt’s lens, we need to consider what exactly changed with colonization. Applying Pratt’s idea would require distinguishing what authentic elements of Samoan culture exist in their own right, before being subjected to foreign influence. Perhaps we need to consider what this line means before we draw it.

Yet how can one trace cultural change if not through the categorization of ‘before colonialism’ and ‘after’? In “The Case for Contamination,” Kwame Anthony Appiah provides a way of distinguishing change that does not rely on considering cultures as finite, bounded entities. Appiah is wary of the concept of “culture” and, rather than pursue a static set of group characteristics, chooses to examine the decisions individuals make within the group. By thinking of cultures as “peoples” instead of people, or individuals, we risk engaging in broad judgements about what makes their cultures authentic. Pratt’s argument is grounded in language, and she defines authenticity in the differences between Quechua and Spanish, and Andean and European artistic design. Tuffery’s work, on the other hand, provides no means of separating “Samoan culture” from that of foreign influence. His bulls are purposefully a novel synthesis, both literally, in the fused metal tins, but also in the way Povi Christkeke moves along with the dancers as one mass in the parade.

Maybe we shouldn’t try to pick apart Tuffery’s art, strip by strip. Appiah considers seeking cultural authenticity a fruitless act. It is unrealistic to try to pinpoint one exact moment with which to define tradition because “trying to find some primordially authentic culture can be like peeling an onion” (Appiah 7). Culture is composed of layers of change over time, rather than a consistent uniformity. Moreover, what we think of as traditions—foods, clothing, raw materials—may at one point have actually been themselves imported or traded by foreign empires. One cannot fit the nuances of a tradition in a box. Trying to define authentic Samoan culture in order to save it from foreign products perhaps “amounts to telling other people what they ought to value in their own traditions” (Appiah 7). Thus Samoan “culture” as an abstract concept is impossible to define for the purposes of tracing colonial hierarchies and therefore assigning cultural meaning to new food products. Instead, it is more fruitful to look at how individuals respond to change.

Pratt and Appiah’s philosophies themselves converge when they consider how individuals create and respond to culture in the midst of a contact zone. Pratt calls this “transculturation,” stating that “while subordinate peoples do not usually control what emanates from the dominant culture, they do determine to varying extents what gets absorbed into their own [culture] and what it gets used for” (36). Poma actively chose visual elements he incorporated from the European tradition, what Andean spatial symbols to use, and when to speak in Spanish or Quechua to form a cogent response to Spanish colonialism. Likewise, Appiah highlights the agency an individual has when confronted with cultural difference. He believes that regarding cultural consumers as passive vessels, or “blank slates on which global capitalism’s moving finger writes its message . . . is deeply condescending” (Appiah 35). Individuals may use products in ways that no longer resemble their original purpose; consumption is an active, not a passive process.

In incorporating corned beef in their diets, Samoans were not blind recipients of foreign colonialism. Health concerns about processed food aside, the mere existence of corned beef in Samoa did not immediately or directly cause Samoans to become less “Samoan.” Distilling a culture to one characterization is further rendered impossible when considering individuals’ variety of tastes, opinions, and consumer decisions. One could argue that introducing this new protein-based ingredient into Samoan cooking offered many individuals more options for preparing satisfying meals. Today, a search on an online recipe collection for “traditional Samoan recipes” yields a range of dishes, from those with corned beef and cabbage to others with coconut milk and taro leaves. Clearly, the use of corned beef has evolved beyond its mere novelty as processed meat in a can. Rather than erasing Samoan cooking traditions, corned beef has become a part of it.

It may seem at first that Appiah fails to account for the power imbalances inherent in colonization, in a way that Pratt does when she contrasts Quechua and European Spanish, but Appiah is not arguing that settlement and violent change did not occur. Instead he is urging us to distinguish between colonization itself and its meaning for the colonized people on a cultural level. We can consider the cultural implications of foods like corned beef from the perspective of what it means to Samoans today without evaluating whether violent change should have occurred at all in the Pacific Islands.

As a living descendant of Samoan ancestry, Tuffery situates himself in contemporary society in which individuals decide for themselves how they will incorporate corned beef into their lifestyles. Tuffery is not challenging or affirming the food as legitimate, but rather depicting it as a timeline of change. His work and the incorporation of his work in the parade demonstrate a commitment to viewing culture as a dynamic, ever-changing reality. In Pisupo Lua Afe and Povi Christkeke, Tuffery proposes that today, corned beef is as much a part of Samoan society as the drumming and dancing that existed long before it. One is not more indicative of “Samoan culture” than the other—today, the tins are fused to the bull in more than just their physical composition. Art like Tuffery’s bulls helps us understand such contact zones not just in regards to the Pacific Islands, but in the broader scope of colonization and commercialization. 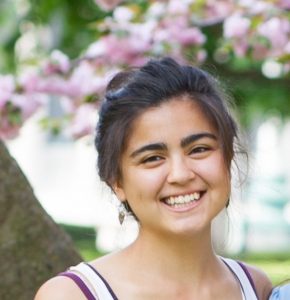 Miranda Simes (CC'20) studies sustainable development and sociology. She is involved in Design for America, COÖP, and Columbia Outdoors Club on campus and, in her spare time, enjoys running in Central Park and finding new music. She hails from the Bay Area, CA.