Cocky British rock star Nigel Tufnel (Christopher Guest) and fictitious producer Marty DiBergi (Rob Reiner) are standing in a room filled with expensive musical equipment. The camera shot switches to a close-up of an amp as the celebrity gloats over its custom volume knob, featuring settings, he emphasizes, that range from one to—not ten, but eleven. The producer is struggling to understand his enthusiasm. “Does that mean it’s…louder? Is it any louder?” he asks. “Well it’s one louder, innit?” declares Tufnel, his British accent dripping with dumb satisfaction. Still not convinced, DiBergi poses the obvious question: “Why don’t you just make ten louder and make ten be the top number?” Tufnel’s smirk evaporates. He pauses, then looks up at the producer: “These go to eleven.”

One of the most well-known scenes from the faux-documentary This Is Spinal Tap, this dialogue appeals to us as a classic example of a pop icon so blinded by fame that he is oblivious to his own idiocy. Consumers of pop-culture find it easy to scoff at Tufnel’s enthusiasm and dismiss him as a fame-addled dimwit.

But while viewers are busy laughing, what they don’t realize is that they are essentially buying into the same fallacy Tufnel falls victim to through his custom-made amp. Since the decade of the film’s release, the recording industry has been increasingly cranking up its own volume knob on the music it releases. The result is what consumers and industry professionals refer to as the “loudness war,” a conflict fought between record labels at the expense of consumers.

There’s no doubt that the volume of recorded music has been increasing over the past thirty years, and it’s not because musicians have been playing their instruments any differently. The culprits are audio engineers and record executives who want to make their products stand out to audiences. The effects of this practice are subliminal. A certain single seems to pop out from the steady stream of Hot 100 artists crooning through your car stereo. It sticks in your head, and a few clicks later, the tune is on your iPod, the royalty check is in the mail to the artist, and most importantly, your money is in the record company’s wallet.

But what’s the big deal about loud music? After all, every stereo, iPod, computer, CD player, or other playback device comes furnished with its own volume knob, to be adjusted to suit the listener’s preference. The real problem with loudness is that it comes at the expense of sound quality. While the analog era relied on media with a strict threshold for volume, digital techniques eliminate this restriction, a phenomenon that engineers have exploited to increase the commercial value of their work.

One of these techniques is referred to as compression. Imagine the intro to a rock song. The guitar player lets a soft chord ring out, then the drummer cracks the snare drum twice, suddenly the whole band makes a forceful entrance, and we’re off. The variations in volume are what make this musical sequence interesting, effective, and, well, musical.

Compression reduces the range between quiet and loud sounds, either by making the quiet louder, or the loud quieter. What was once a curve with plenty of peaks and valleys becomes squished down to a pancake. Engineers are now free to turn up the overall volume of the song without worrying about the loud parts blowing out your speakers.

The product of this technique is music that catches your attention, but lacks substance. Think of an overenthusiastic TV salesman. He screams at you to buy his fertilizer, or shoe insert, or super-absorbent cloth. Then when it arrives, you realize it’s just a towel. The same marketing tactic is being applied to music. And it’s working.

Since the 1950s, audiences have experienced music primarily through recorded media instead of concerts. But when these media are being exploited to line the pockets of their distributors, to what degree do they continue to convey the musician’s artistic intent? Perhaps the real tragedy of the loudness war is not that it dilutes the dynamics of audio or dupes consumers into settling for less, but that it perverts musical meaning in the name of profit. When it comes to music, the ethical choice is to leave the industry volume knob at ten, and let the listeners turn it up to eleven if they are so inclined. 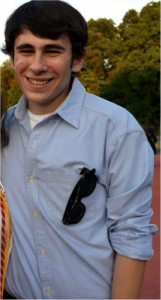 Dan Singer (CC ’17) is considering a major in Creative Writing or Anthropology. He hosts a bi-weekly radio show at WKCR where he works as Program Director. He also contributes regularly to Columbia’s undergraduate magazine, The Blue and White. In his free time, Dan enjoys playing his instrument, the vibraphone. Before coming to Columbia, he grew up just across the river in northern New Jersey.

Issue
Vol. 11 (2015)
Section
Op-Ed
How to Cite
Singer, D. (2015). Turning It Up to Eleven: The Perils of the Loudness War. The Morningside Review, 11. Retrieved from https://journals.library.columbia.edu/index.php/TMR/article/view/5424