“Sorry, I don’t know your brother’s roommate who’s an officer.”

And with that she turned and walked away from the bar. I was happy to see her and the $7 drink go. Nine out of ten conversations I have had since my honorable discharge in 2012 hit this same threshold.

It seems my entire four-year enlistment in the Army can be distilled down to these sorts of remarks. I fondly refer to this exchange as “The Kill Factor.” Unless I am speaking about deployment, death, or basic training, most people lose interest once they find out I don’t know their other military friend. The difficulty of reintegration is something veterans deal with once their contract is up because it’s almost impossible to apply “military life” to what is referred to as the “civilian world.”

Even the terminology is incompatible.

These misunderstandings occur in more realms than just the New York City nightlife. The same awkwardness I encounter while enjoying a beer, I have found waiting for me in uncomfortable silences at job interviews. It seems employers are as much at a loss to find common ground as everyone else. I spent over a month working with professional resumé writers just to translate my military experiences into a language that a civilian employer could understand. One year later, I still don’t know what a second interview looks like.

As of May 2013, there are more than twenty-one million veterans in the American population and with 100,000 soldiers set to phase out of Afghanistan—34,000 of them in the next year alone—Americans are going to see a huge rise in awkward conversations at local pubs, not to mention high rates of unemployed vets.

As a medic in the Army, I worked for three years in a primary-care medical clinic followed by one very intense year in Afghanistan. That year, when I wasn’t out on mission, I was running an aid station near the Pakistan border and was personally responsible for the lives and health of 120 men. After nine months I was transferred to a field hospital emergency room where I assisted doctors, surgeons, and specialists treating soldiers with traumatic injuries. Despite this on-the-job training, the only certification I carry to a job interview is an EMT-Basic card. In the civilian world, my scope of practice is limited to administering oxygen to patients and documenting their complaints.

Not to say that oxygen isn’t important, but it’s a half-step from insulting to suggest that my experiences amount just to that.

While volunteering on my campus ambulance corps, I ran into the same problems. Once my peer volunteers got over “The Kill Factor,” my past military experiences were irrelevant. As a new volunteer, my responsibilities were limited to stocking the ambulance and taking patients’ vital signs. After handling mass casualty situations on my own and being responsible for the lives of many, this was a half-step past insulting.

Thankfully, the government has incredible programs to help veterans get an education. The Post-9/11 G.I. Bill and the Yellow Ribbon Program are nothing short of legislative miracles that are incredibly effective for integrating veterans into civilian educational and professional life. However, there is no legislation that can bridge the social disconnect between those who no longer identify with the military and a civilian society that learned how to typecast from The Hurt Locker.

The “broken soldier” image casts a shadow over veterans that will always keep us from returning to our normal lives. Without a doubt, there are plenty of men and women exiting the military who deal with PTSD and innumerable other military-induced issues and impairments. I purposely avoid using the word “disability” here because stereotypes of victimization must be avoided. These wounded warriors do not deserve to be ostracized by the consequences of their service.

Indeed, none of us do. 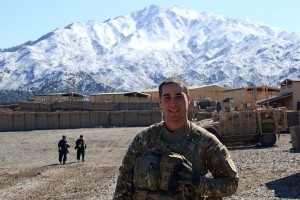 VINCENT WALDRON '16GS is a veteran Army Medic who served in Afghanistan 2010-2011. He is a Human Rights major at Columbia University School of General Studies and continues to participate in medical relief work in Third World countries.