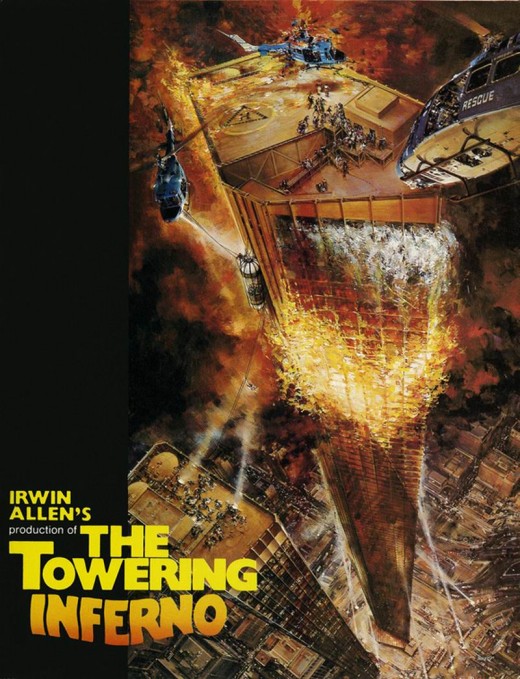 The title and poster image of The Towering Inferno forewarn that something goes catastrophically wrong in the gleaming monument to human aspiration and engineering – the world’s new tallest building – featured in the film. Flames engulf the fictional skyscraper overlooking San Francisco Bay and we learn through foreshadowing and exposition that human foibles are culpable for setting the stage for the conflagration. Once the fire begins to rage unchecked, multiple close-ups of the burning building (while partygoers are trapped in the penthouse ballroom and firefighters wage a fierce battle to control the menace) convey the enormity of the growing disaster and the danger faced by all of the characters. But does the peril perish with the final flickering of the inferno’s embers? Or does the flick imply that there is more to fear than fire itself?

The film, released in 1974, follows builder James Duncan (William Holden) and architect Doug Roberts (Paul Newman) as they prepare to host a gala celebrating their completion of their 138-story glass colossus. Early in the proceedings, a short circuit sets Roberts on the path of discovering that his wiring specifications were not adhered to by Duncan’s son-in-law, electrical subcontractor Roger Simmons (Richard Chamberlain). As Roberts investigates how extensively Simmons cut corners to keep from going over budget (at Duncan’s behest), a malfunctioning circuit breaker on the 85th floor sparks flames that ultimately kill several people and besiege gala attendees on the 135th floor. Attempts at rescue – through the buildings glass elevator, helicopters, and creating a virtual zipline using a rope shot to an adjacent building – are led by fire chief Michael O’Hallorhan (Steve McQueen) who bemoans the complications engendered by the height of the building and location of those trapped. The multiple-alarm blaze is ultimately brought under control after the deaths of over 200 people.

If the movie had been made, as is, a mere 10 years later – set in one of the epicenters of a newly encroaching disease that would inflame the city and engulf most countries in a global epidemic – it might have insinuated a conservative, mainstream fear of AIDS, and by extension condemnation and trepidation regarding gay men, with San Francisco standing in for homosexuals, one of the identified higher-risk populations for contracting AIDS in the early 1980s and very well represented in San Francisco’s population. But absent such a time leap, does The Towering Inferno demonize at all and what does it say about human fear and anxiety?

Certainly, fire and fear spread throughout this cinematic cautionary tale. The fear, restrained at times, particularly among the stoic, virile heroes, is justifiable, not paranoid. Characters have few means of escape and dread a fiery death. The fire, while provoking panic, is the unintended consequence of human short-sightedness, laziness, and arrogance. As depicted by Richard Chamberlain, Simmons displays his villainy through his defensiveness and callous response to the unfolding disaster as much as his cost-cutting, slipshod job of wiring the heralded new building. His self-centered approach to saving only himself gives the viewer some measure of judgmental satisfaction when he plummets to his death. He may be a scapegoat, but human hubris doesn’t escape unscathed. In the penultimate words of the picture, fire chief O’Hallorhan exhorts to Roberts, “Ya know, one of these days you’re gonna kill 10,000 in one of these fire traps, and I’m gonna keep eatin’ smoke and bringin’ out bodies until somebody asks us how to build ‘em.”

This practical point reportedly had a genuine positive impact, influencing the tightening of various sprinkler code guidelines around the world. It also highlighted the human ego manifested in fashioning it as a good idea to erect such grandiose tributes to power. On the architectural level, humanity seems to have solved the inherent risks in creating even taller skyscrapers. But has our hubris been checked? The unintended consequence of antibiotic resistance suggests human overreach in combating a well-concealed foe. Further, the increasing frequency of colossal natural events—tsunamis, hurricanes, tornadoes, earthquakes, floods, and droughts—arguably triggered and exacerbated by human-induced changes in the global environment indicate that we may yet face our comeuppance and that our persistent fear of death may be aggravated by our heedless activities that, ironically, may hasten its arrival.

Complicity in calamity is ascribed individually and globally in The Towering Inferno, though in a less prejudicial way than that expressed toward AIDS patients during much of the epidemic, or, in the celluloid world, the Tom Hanks character by his colleagues in Philadelphia, who essentially believed that he got what he deserved. The Towering Inferno also offers a less salient metaphorical depiction of the threats to humanity than, say, the red menace (read: communism) of another Steve McQueen movie, The Blob. But the shattered, charred glass of The Towering Inferno may reflect the anxiety attendant upon the potential for human pride and aggrandizement, on a large or even small scale, to run amok. Perhaps it is contagion—Ebola, parasitical aliens, zombies, fire, fear itself—that suggests real and imaginary, visible and invisible, threats to our survival that compound our lurking sense that sometimes humanity is its own worst enemy and that we can exacerbate any and all dangers.