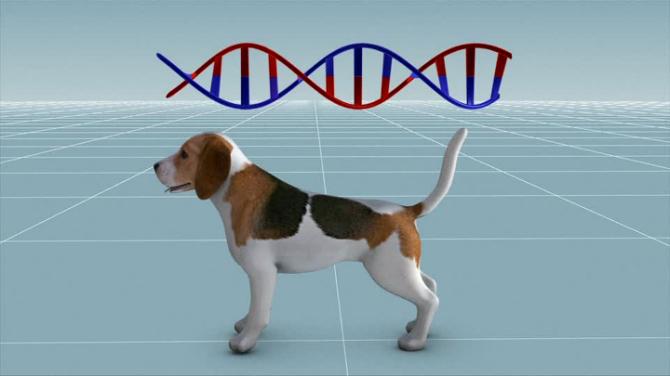 Although China’s elimination of the one-child policy headlined news last month, a quieter headline also appeared: that of the first gene-edited dog. While reporters joked about the ability to now custom-make pets, the genetic engineering of animals in China is neither a new nor even a recent development. What does this phenomenon mean for our rapidly advancing biotech world?

Scientists from Key Laboratory of Regenerative Biology at the Guangzhou Institutes of Biomedicine and Health were the first to report having created a beagle with double the amount of muscle mass by deleting the myostatin gene. This was a preliminary trial of sorts, because the further goal is to create dogs with mutations that mimic human diseases such as Parkinson’s and muscular dystrophy. Researcher Liangxue Lai says the goal of such research is to show that dogs can be a better disease model for biomedical research than mice or pigs, as they are closer to humans in metabolic, physiological, and anatomical ways. As such, beagles are being bred at a rate of more than 2000 a year for research at the Guangzhou General Pharmaceutical Research Institute.[1]

The myostatin deletion was made through CRISPR technology, which is the newest and most precise method of DNA editing technology in widespread use today.[2] Although it’s now common to see CRISPR’s use in biotechnology, this does not diminish the fact that there is a growing trend in China specifically to modify animals using this technology. Animals that have already been cloned and modified with CRISPR in China include goats, rabbits, rats, monkeys, and also humans. A different team in the Guangzhou province modified the genes of non-viable human embryos this past April.[3]

The 2012 documentary DNA Dreams by Bregtje van der Haak chronicles the work of BGI (Beijing Genomics Institute) China’s leading “maverick” genomics research institute and the largest genomics lab in the world. [4] Van der Haak was specifically interested in following the lives of the extremely young scientists who make this work a reality, such as 18-year old Zhao Bowen. He dropped out of high school to lead the Cognitive Genomics Laboratory, an initiative seeking the genetic basis of intelligence by analyzing the DNA of 2000 gifted children. BGI was created in 1999 so that China could participate in the Human Genome Project. Today, it is an independent research institute with more than 4000 employees.[5] Also featured was an embryologist in charge of creating mini-pigs: genetically modified pig embryos made more susceptible to disease (for example, type II diabetes) who are then cloned to be studied as model organisms.[6]In other provinces in China, BGI has experimental farms that clone cows and sheep as part of their “Ark Biotechnology” enterprise, whose focus is the mass production of transgenic (genetically altered cross-species) cloned animals.[7]

But what is behind China’s intense drive for genetic engineering and cloning? Duanqing Pei of the Chinese Academy of Sciences notes that the efforts are part of a “national scientific priority” and also “part of China’s effort to establish world-class research.”[8] Yet DNA Dreamsoffers another perspective: the country’s cultural tone. Van der Haak was drawn in by “the dichotomy of her own cultural experience in Europe verses the enthusiastic attitudes toward new technology in Hong Kong, where the average person has two mobile phones and there’s an intense interest in the high-tech developments on the horizon.”[9] To be sure, a technologically oriented society driven by efficiency, production, and a “scientific” mindset is not unique to China. Yet a European or American attitude towards genetic manipulation still maintains a certain degree of hesitance and caution, while China exhibits a totally embracing, uninhibited approach.[10] The scientists of BGI see a fascination with understanding organisms in terms of their genetic make-up, evident in their push to understand the connection between genes and intelligence. But the documentary also reveals something curious about the personal lives of these young scientists. Of the 4000 employees at BGI, over 90% are born after 1980, placing them in their 20s and early 30s. They have a fixation with being smart or ‘productive.’ Moreover, they see science and technology as the way in which to better the human condition, precisely by becoming smarter. The general trend was, if we can improve humans, then why not do it? Van der Haak says:

“When you think of DNA and genetic manipulation and what’s made possible by mapping the complete human DNA in combination with information technology – and you consider that China has had a one-child policy for 30 years, and they think about having the best child possible before it’s even born… It becomes a bit worrying and interesting, to say the least.”

BGI and other such institutions in China are described as maverick. Not only are they non-governmental and not externally regulated, but they also exist to push the boundaries of what is currently possible by simply going ahead and doing it. Does the lack of hesitancy or caution towards using technology on animal life carry any implications on how human life is then viewed and treated in the lab? Although a first and imperfect attempt at gene-edited beagles, the result of knocking out the myostatin gene has implications for human therapy: U.S. doctors are attempting to block myostatin in gene-therapy experiments to slow muscle loss in boys suffering from Duchenne muscular dystrophy. The question of gene editing / genetic engineering in humans at the embryonic stage is still an open question, but is not one limited by “if” (i.e. should we do it), rather, by a matter of when. The application of this technology needs to be better perfected before it can be used “safely,” which is exactly what the animal trials enable. George Church (a world leader in the gene-editing field) says that the alteration of larger animals such as dogs opens the path for use in humans by allowing people to see that “it works.”[11] Thus the precedent China has already set for animal genetic engineering opens the door to successful human engineering. Yet this “maverick” mindset leads to experiments that open Pandora's box, forever changing the landscape of technoscience interventions in the same way that Edwards and Steptoe changed the landscape of human reproduction through IVF, which was initially performed solely on animals. One could obviously argue that this was for the better, however, with the first children born from IVF only just now reaching their 30s, we’re seeing that the effects of assisted and third-party reproduction aren’t so harmless.[12] The power now wielded to create (clone) and manipulate (engineer/edit) animal life means that human life is also no longer beyond our technological manipulation. What does genetic engineering and cloning say about what a human being is? We would do well to ask what is implicated by such attitudes towards biotechnology on the meaning of human life, before rather than after the fact.

[5] BGI’s goal is to “sequence the genome of every living thing,” and is responsible for a number of different projects concerning sequencing and analyzing DNA (two which are featured in the documentary include an understanding of the genetic basis of IQ and also cloning genetically altered animals for research purposes).

[10] Van der Haak says of her experience: “in Europe and America, the attitude toward technology and especially genetic manipulation is more critical and always has fear mixed in. And there’s the idea that nature is better than manmade things. Even for non-believers, it’s still a deeply Christian culture. An American researcher would hesitate to say that ‘the cloned embryo under my microscope is life that I created,’” ibid.

[11] For a related example, the genetic engineering of pigs is helping to make xenotransplantation a reality, that is, the cross-species transplant of pig organs into humans, by eliminating the risk of animal pathogens/disease being transferred in the process. George Church is behind such research: http://www.economist.com/news/science-and-technology/21674493-genome-engineering-may-help-make-porcine-organs-suitable-use-people-no-pig

[12] See, for instance, Liza Mundy’s Everything Conceivable: How the Science of Assisted Reproduction is Changing Men, Women, and the World (2008).