There are some who believe that the physical threat of racism has de-materialized, that we live in a ‘post-racial’ country, that the imminent danger faced by black and brown people every day is a product of individual experience rather than systemic oppression. And yet, despite such opinion, the facts tell a different story. Racism is adversely affecting the African-American community in the most physical and primal way possible: it is tampering with generational reproduction.

According to a 2018 study conducted by Duke University, the black Infant Mortality Rate (IMR) in the United States is about 11.2 per 1000 live births, roughly twice that of the white IMR. More disconcerting, the most educated black women are the ones facing the greatest risk of infant and maternal mortality. In fact, black women with doctorates and professional degrees have a higher IMR than white women who never finished high school.

Yes, that is correct. The pursuit of a post-bachelor’s degree can actually hinder, rather than help, black women; elevated levels of academic success can lead to heightened risk for both African-American mothers and their babies. It is not only highly educated African-American women who are adversely affected, but many other exceptionally successful women as well. Consider Serena Williams’s pregnancy complications, for instance. According to a 2018 Vogue article by Rob Haskell, Ms. Williams delivered her baby via emergency C-section after experiencing an alarming heart rate drop. After her daughter Olympia was safely delivered, Serena began experiencing excruciating pain. She immediately assumed that it was a pulmonary embolism, given her experience with blood clots, and informed the hospital staff. They did not believe her, and instead administered an ultrasound.  She was forced to demand a CT scan, at which point her medical staff found blood clots that posed a significant health risk. What followed was a series of additional medical complications, including the discovery of a large hematoma that flooded her abdomen. One of the most accomplished women in the world faced severe health risks and lost crucial time with her newborn daughter due to complications that she foresaw, but which her medical staff did not immediately address. And she is far from being alone in having faced these complications. Williams’s case begs a reconsideration of how African-American female health is treated in this country.

The inverse correlation between success (academic or otherwise) and pregnancy risk defies normative conceptions of the protection provided by upper-class membership. Why, then, does the black/white infant mortality gap exist? According to the Duke study, it may be the increased stress experienced by professional women in the workplace that is to blame for the chasm. Evidence shows that being the sole African-American woman in professional environments where racism still persists often takes a heavy toll on women. Perceived discrimination is generally linked to increased levels of inflammation and elevated blood pressure, which can have a negative impact on both babies and mothers during pregnancy.

Yet this study still leaves some unanswered questions. One would think that the stresses experienced by low-income women, such as economic uncertainty and circumstantial pressure, would be even more consequential than the stresses induced by professional racism. So, is stress the only factor to blame for this situation? Another factor to be considered is the unwillingness of physicians to properly respond to women of color due to their belief in the illegitimacy of black expertise (as occurred with Williams).  The notion that African-Americans lack the ability to understand their own bodies indicates that a frightening belief in the intrinsic ineptitude of black people still exists. This may explain why education and status cannot make African-American women immune to inequality; their achievements will never be equated to those of their white counterparts.

The fact that stress and racist medical responses may be to blame for these statistics demonstrates just how deep the tendrils of racism have been dug in the African-American community. It confirms that the ‘American’ identity is disparate, with some people experiencing health benefits similar to New Zealand’s, while others live an experience similar to that of mothers in lower-income nations like Thailand, Romania, and Grenada. Furthermore, it subverts the argument that African-Americans can use education and access as a means to transcend the oppressive confines of racism. Pregnancy risk does not discriminate when threatening black women. Educated or uneducated, wealthy or low-income, all black women are at risk. The ‘pick yourself up by the bootstraps’ argument that is so carelessly employed by many of America’s political elite becomes negated once you look at the facts: it is the very access which African-Americans are encouraged to strive for that is posing the greatest threat to black women.

While the narrative of African-American oppression is largely dominated by the unjust violence inflicted upon men within the community, the suffering experienced by women warrants equal attention. Women have served as pillars of support and hope in the African-American community, but their needs have taken a secondary role to those of the men behind whom they so ardently stand. The very livelihood of African-American mothers and children needs to start being of greater importance.

Women should never have to choose between educational and professional advancement, and the right to life and safe reproduction. This should especially hold true in the United States of America. As a black woman, who knows plenty of black women, I was frightened and shocked when I learned about this research. As an individual who attends a top-tier university, and who is headed down a high-level career path, the stress of being the sole black woman in a room and among my colleagues is a given. The fact that this inalienable anxiety might determine the future to which I have access is very unnerving.

Without mothers we are nothing, and without equal reproductive rights we cannot spawn new generations as symbols of promise and change. The African-American access to reproductive rights must be further researched and addressed, before generational effects become irreversible. Let’s re-center the focus of our battle for equality. 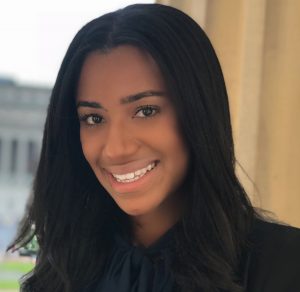 Asatta Mesa ’21CC studies Economics and Political Science. She is involved in the Columbia Economics Society, Columbia Women’s Business Society, Praetorian Management LLC Fund, and Columbia University Students for Human Rights. When not occupied with her studies and club responsibilities, Asatta enjoys keeping up with financial markets and unpacking social injustice with her peers. Despite having a busy schedule, she also enjoys venturing downtown and exploring new restaurants and art museums. She is from Miami, Florida.