Can we rely on compassion, despite its limitations? This is the question that Martha C. Nussbaum, a philosopher and professor of law and ethics at the University of Chicago, seeks to answer in her essay “Compassion & Terror.” She is concerned with this emotion’s difficulty in crossing “lines of time, place, and nation—and also,” she adds as an afterthought, “the line of sex, perhaps more difficult yet to cross” (11), a problem she identifies as she close reads Euripides’s tragedy The Trojan Women:

But did those imaginations really cross those lines? Think again of that invocation of Zeus. Trojans, if they worshipped Zeus as king of gods at all, surely did not refer to him as the president of the city council; prytanis is strictly an Athenian legal term. So it would appear that Hecuba is not a Trojan but a Greek. And her imagination is a Greek democratic (and, we might add, mostly male) imagination. Maybe that’s a good thing, in the sense that the audience is surely invited to view her as their fellow and equal. But it still should give us pause. (11)

Nussbaum’s essay ends on a more hopeful note: while it’s hard to imagine another’s position, if we listen to both our emotions and the voices of those toward whom we’re feeling compassionate, it is possible to “cross those lines.” However, many of her examples are curious in that they require little imagination and are painfully close to home. “America’s towers, too, have burned” (11), she states, echoing her first line: “The towers of Troy are burning” (10). She compares the scene of a Greek audience witnessing The Trojan Women to that of America after the events of September 11, and this is only the first in a long list of examples specific to American culture. True, by grounding her ideas in contemporary events, she makes them more accessible to the public, but—echoing Nussbaum’s words—it gives me pause. Was it not enough that Troy’s towers were burning? Did Nussbaum distrust the ability of her readers’ imaginations to “cross those lines”?

At first reading, the essay seems to suggest that yes, she did—and worse, that she herself was not able to think outside of her immediate reality. September 11 sets the scene, but the examples are plentiful. The materialistic culture of Seneca’s Rome is the same as that of America (25). A national baseball game that leads the spectators to chant “U-S-A” to the umpire (13) serves as a counterpart for Adam Smith’s “man of humanity in Europe” who reacts rather indifferently to the whole of China being erased from the face of Earth (qtd. in Nussbaum 12). Nussbaum’s focus is on America even when she ventures out of the philosophical canon and into modern psychology: pathologically narcissistic American boys, rich American teenagers (24–25). Nussbaum points out Euripides’s “engagement with contemporary events” (11), and she seems to be copying his method, with the disadvantage that she falls into the type of ethnocentric imagining that she recognizes as poisonous.

What is Nussbaum telling us with these examples? Let’s go back to the towers: they are burning, and the terror of their burning makes an audience feel compassionate. In the case of Troy’s towers, this audience is made up of the descendants of “the conquering Greeks” (10) who set fire to the towers: the assailants pitying their victims. In the case of America’s towers, the tragic spectatorship has a narrower scope: the audience is America, feeling sorry for herself and demonizing her ‘assailants,’ “dividing the world into an ‘us’ and a ‘them’” (13). Nussbaum doubts that Euripides’s audience did actually “cross those lines,” (11), given the assimilation of Hecuba’s imagination into “a Greek democratic . . . imagination” (11), but for the Americans there is never a line to cross, no otherness to assimilate. Except that, on a metatextual level, there is an assimilation going on: that of the Greek scene into an American one. It appears that Nussbaum is, once again, copying Euripides’s method. However, one point is unclear: for whom is she copying him? Euripides is writing for the Athenians; who exactly is Nussbaum’s audience?

We ascertain that she is speaking to Americans, and this is no surprise: Nussbaum herself is American, and “Compassion & Terror” was delivered as a conference paper at Columbia University and later published by another American university. Beyond the real audience, there is a target one, the people Nussbaum had in mind as she composed “Compassion & Terror,” and her use of the deceptively all-encompassing first-person plural makes it easy to determine who Nussbaum’s audience is. If we look at her examples as situations of “us vs. them,” in which the “us” is the agent of flawed compassion and the “them” is the object of compassion, what we find supports the idea that Nussbaum had a well-defined audience in mind. The “us,” which is equivalent to the “we” that narrates the essay, is made up of Americans. The “them” is more diverse; it ranges from American minorities to people on the other side of the world, including animals, gods, and surprisingly, women: "[I]f we don’t think a social order unjust for denying women the vote, or subordinating African-Americans, then we won’t see the predicament of women and African-Americans as bad, and we won’t have compassion for them" (16).

In this passage, Nussbaum’s usage of “we” is particularly striking because it makes her both the agent and the object of compassion. Both can’t be true, and since she identifies as female, then she can’t be part of the “we.” The seemingly casual “—and also, the line of sex, perhaps more difficult yet to cross,” (11), the “(and, we might add, mostly male)” (11), added as if in a hurry and separated from the rest of the text through punctuation, take on a completely new light. Nussbaum’s unexplored suggestions of gender as a factor that can get in the way of compassion are her most obvious indicators of the essay’s target reader, but the fact that the agent and object of compassion should not overlap is true of all of the examples and it allows us to finish delimiting Nussbaum’s target audience by removing every “them” from the general “us” with which we started.

“Those sentiments stop short at the national boundary” (13), affirms Nussbaum, and while this might be true of her real audience, it is too generous a description of her target reader, who turns out to be not only specifically American, but also specifically white, specifically male, and financially secure. To answer my original question, Nussbaum does not trust her readers’ imaginations to be cross-cultural, and this is the source of the ethnocentrism we see throughout “Compassion & Terror.” Rather than evidence a limitation of Nussbaum’s reasoning, this tells the reader something about the particular group whom she chose as her target audience. A look at Columbia’s demographic distribution will tell you that this group is far from being the majority of the student body, so Nussbaum’s choice of her target reader is certainly interesting, considering that this is the group that exercises the most institutional privilege within the country. When we revisit the text with this choice in mind, we find its effect and its cause.

The effect is that it narrows the scope of her criticism, ultimately giving a more positive outlook on the state of compassion in society. The faults she finds in compassion are not intrinsic to the emotion but rather the shortcomings of the people who feel it. Since Nussbaum is implicitly examining only affluent white American men, then the less her readers fit into that group, the better at cross-cultural imagining they must be. Nussbaum supports her criticism of education with Kindlon’s study about how boys are taught to neglect their emotions (24). This study does not apply to girls, whom society encourages to be vulnerable, in the same way that his study about the materialism of rich teenagers (25) does not apply to their less affluent counterparts. Can this be true? Is every single person outside of the target audience adequately compassionate? It seems so. Just look at how, as these people read Nussbaum’s essay, they are able to engage in an exercise of self-criticism that wasn’t intended for them.

The reason why she directs her essay to this privileged group is tied to the nature of her project. Nussbaum emphasizes that “an education in common human weakness and vulnerability should be a very profound part of the education of all children” (24). Her solution is future-oriented: how “we” can raise our children to be better at compassion than “us.” And since education is institutionalized, in order for it to change, the established notions of what education is must change. The group that holds the most institutional power has to be aware of change needing to happen; this group coincides with Nussbaum’s target audience.

To talk to this grown-up version of Kindlon’s teenager, to make this emotionally stunted man whose imagination’s ability to “cross those lines” (11) can’t be trusted, understand her voice, Nussbaum has to take one last cue from Euripides. She has to invite her target audience to see her as their fellow and equal by speaking to them in their language, and that is the root of the ethnocentrism of her essay. Nussbaum becomes another Hecuba, calling out in Greek to an audience that can, however momentarily, listen. 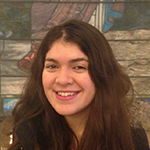 Maria Morales (CC ’18) is majoring Comparative Literature and Society, maybe concentrating in Linguistics. She speaks Spanish, English and is working on her Russian. This year, Maria is a literary criticism editor for The Birch and she lives in Metta House. She is from Caracas, Venezuela.