At 10 a.m. on the Sunday after Thanksgiving, I attended service at Canaan Baptist Church of Christ in Harlem. Arriving half an hour before the service began, I was jarred find a line stretching down the block. I stood next to a French woman and my white boyfriend, who repeatedly muttered that we were being segregated—many felt the same way. The mostly white queue in sneakers and jeans glowered at the formally dressed black congregants who entered the church without waiting in line, being waved in and personally greeted by the guard. The French woman complained loudly, with one phrase crossing the language barrier cleanly: attraction touristique.


Visiting the church for the first time, donning Guess, Gucci, and accents, the white line was in fact composed of tourists. They had come to see a Congregationalist sermon in Harlem, a neighborhood suffused with history and culture, including the Apollo Theater and a strong tradition of gospel music. For Canaan Baptist and dozens of other churches in Harlem, the tourists are vital to their continuance—they fulfill a necessity (Stahl).

Harlem churches find themselves in financial crisis as they face dwindling bases of tithers: those who donate ten percent of their income to the church (Gregory). Some churches report losses of fifty percent of their tithing base (Gregory). In response, many churches have taken loans from local banks and more than sixty participate in the tourist trade (Gregory). Why the churches are facing such radical changes in membership can be explained in part by looking at Harlem’s gentrification.

As property values soar and money pours into the area in the form of new developments, the community finds itself reeling with change. In an active effort to raise rents, landlords have begun offering buildings with upscale cafes with low-rent spaces in their ground floor so as to make the units above seem more attractive (Amato). Regardless of whether or not gentrification has caused this new reality for Harlem churches, the fact remains: their role in the community, as the community changes in composition, is attenuating.

Canaan Baptist’s former pastor, the Rev. Wyatt Walker, stood outside the church in 1970 and preached a sermon about drug dealing in the neighborhood. “We’ve been living dangerously for a long time, and we’re not afraid to name names,” he said (Gregory). Compare this to prayers delivered to a crowd of wide-eyed tourists by Canaan’s current pastor, the Rev. Thomas Johnson—however lyrical, his words seem hollowed.

One questions the ethics of a spectacle intended to preserve a culture. Harlem Spirituals capitalizes on the community’s surging attention as a tourist destination: Routard, a prominent French travel guide, gave Canaan Baptist two stars out of three (Stahl). Harlem Spirituals offers weekly tours for people to witness “live gospel music” for just $59 per adult. On Canaan Baptist’s website, the question “Does Canaan accept Euros?” is answered under the donations section. “No, Canaan only accepts U.S. dollars.”

As it turns out, the French woman had done her research: if you spoke to the security guard and promised to stay the entirety of the service, you too could sit with the congregation. The guard then asked how many people were in her group. “Eighteen,” she responded. Perhaps she was leading a youth group. The tourists who hadn’t done their homework were seated in the balcony.

During the service, the audience was transfixed. Four hymns were sung, three people were baptized, and two newborn children were welcomed into the church. As the congregants applauded the events, audience members lurched forward in their chairs. Some leaned perilously over the balustrade, Nikons dangling. Others asked to sit with the congregation and sulked after being rebuked, muttering that we were being segregated. I can’t help but appreciate their complaint: they are right to be angered by the situation.

When a people must commoditize themselves to preserve their unity, when a church that once gave a voice to a struggling community must sing through a crackling microphone to be heard by all, something unjust has absolutely occurred. The tourists had no place in this church—they didn’t deserve the balcony or the line. Their seclusion from a church they did not attend was quite obviously not segregation. I only wonder if it was a transaction.

Yet if not for the tourists, Reverend Johnson would have delivered his sermon to an empty balcony. Watching tourists watch the congregants, I found that the entire spectacle seemed like but a proxy to a larger struggle. Church tourism, a reaction to a community being squeezed out and apart, occurs as Harlem is being commoditized and gentrified. What I witnessed was only the aftermath. When the collection basket came around, the offerings felt like the price of admission.” 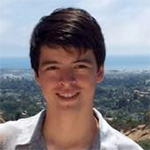 Julian Yano, CC ’18, is studying Biology. His favorite authors include Joan Didion, David Sedaris, and David Foster Wallace. He is a member of the Academic Awards Committee and a work-study at the Dietrich Lab. From Long Beach, CA, he is a lifelong tennis player and nature enthusiast.