In March of 2009, at Smalls Jazz Club in New York City, I heard, “live,” the sound of a saxophonist who died in 1955. I watched Luigi Grasso, a twenty-three-year-old saxophone player from Italy, play Charlie “Bird” Parker’s tunes and improvisational lines with Parker’s tone and phrasing, brandishing even the same model horn and mouthpiece that Parker often played. As a huge Bird fan, I found the performance exhilarating, if slightly unsettling. I wasn’t just watching art based on other art; I was watching a live imitation—an artist whose sole purpose was to recall the work of another artist.

I hesitate, however, to place jazz performers like Grasso in the same camp as Elvis impersonators or “copy-paste” plagiarizers. His playing was enjoyable even for those unfamiliar with Parker’s music, and there was, to be sure, nothing Grasso sought to conceal: his references to Bird were explicit, obvious to anyone even vaguely familiar with Parker’s sound or compositions. What was it, then, about Grasso’s performance that made me feel uneasy? There is, I believe, a tendency to consider such blatant imitation a kind of theft, an offense against the originator and the art form. We may also be inclined to judge the performance a disservice to the imitator, who must reject his own “voice” to recreate another’s.

But Grasso is not just an imitator. He is a jazz imitator. And jazz seems in many ways to allow for and perhaps even encourage imitation, both as a part of the effort to preserve stylistic trends from earlier eras and to the extent that imitation aids in the development of a musician’s personal, creative voice. A jazz musician finds his own voice as an improviser through, rather than against, tradition. Jazz improvisation is not just a product of arbitrary melodic and rhythmic choices, nor does it depend on a spur-of-the-moment exploration of whatever happens to come to mind. It is, rather, a structured medium of communication between musicians with a common understanding of harmony and a familiarity with typical melodic gestures. Improvisers rely heavily on the “jazz tradition,” which acts as a common source of material for any performer within the idiom. Esteemed saxophonist Branford Marsalis explains that improvisation is “not really about making up your own ideas any more than speaking English is about making up new words” (Marsalis). The “jazz as a language” metaphor has, as of late, become a popular trope in jazz pedagogy. It accurately describes improvisation as a method of communication that necessarily relies on a shared set of musical ideas—a jazz vocabulary. Students of jazz develop a vocabulary by memorizing the work of their predecessors, whose improvised solos act as repositories of “words” and “phrases.

But could this kind of study actually be considered a form of plagiarism, much like a writer lifting another’s words? Jonathan Lethem, in his essay “The Ecstasy of Influence,” addresses the creative process and plagiarism, using, appropriately, sentences and ideas lifted from the works of others. He proposes the idea of a “commons” as a way to understand the communal nature of creative achievement (66). Language, for Lethem, is the best example of a commons as it is shared between people, “possessed by no one, not even by society as a whole” (66). If we accept, along with Marsalis, the jazz-language comparison, then Lethem’s analysis certainly applies. Lethem notes that art and culture are like “the commons of language: altered by every contributor, expanded by even the most passive user” and that even imitation exemplifies “passive use” (66). Rather than interacting with the source through deconstruction, or by reimagining it in a modern context, the imitator seeks only accurate re-creation. In Lethem’s view, such an act is not an offense against the art form but rather an exercise that serves the art form, that allows it to expand and change. The passive user acts as a kind of promoter, exposing the original to a wider audience than was initially garnered. Lethem cites an extreme case in which Edmund Spenser’s “Prothalamion” became “known largely because of [T.S] Eliot’s use of it” in his “The Waste Land” (61).

Although Parker’s popularity is not dependent on contemporary imitation, live re-creations do expose his music to a wider audience. Perhaps more importantly, modern imitations of Parker are, by their very nature, forms of interpretation. No one sounds exactly like Bird. The passive user, through imitation, faces the impossible task of separating his production from his identity, the challenge of re-creating what he could never have created. The work of an imitator thus inevitably departs from its source of influence. The passive user, perhaps as a mark of his failure, becomes an interpreter, an active user—a contributor rather than a taker.

In her essay Copy Wrong: Plagiarism, Process, Property, and the Law, Laurie Stearns, like Lethem, cites the inadequacy of current copyright law, which, by their accounts, fails to acknowledge the interdependence of creative achievements. Instead of a commons, Stearns proposes a “creative contract,” a social agreement between creator and audience member (540). Stearns imagines such a contract existing alongside copyright law. “Infractions . . . such as plagiarism” are therefore breaches of the creative contract and “infringements of property rights” (540). She does not attempt to outline a legal environment that is any less hostile to artistic imitation. Rather, Stearns seeks to shift some of the challenge of defining and enforcing restrictions from the judicial system to a social web of creators and users.

Although Lethem describes his commons as “controlled by common consent,” he does not regard the commons as a violable contract (66). He believes that the commons is “constructed as a mutual gift by those who compose it” (66). The consent is therefore inherent to the creation itself; the product is a “gift,” open to any use, corrupted only by “belief in private ownership” (67). The distinction between art as a gift and art as an agreement is perhaps the defining point of divergence. The “contract metaphor” (Stearns 540), for Stearns, broadens the narrow legal “conception of harm” (533). It expands the established legal agreement, regarding imitation as a violation that affects the “original work,” legitimate “contributions,” “all writers and scholars,” even “the public as a whole” (534). Lethem’s commons, however, seem to allow some room for imitation. If the art is indeed a gift, belonging to “everyone and no one,” part of an inclusive public commons, its imitations and variants become a part of the structure rather than a violation of it (66).

Stearns and Lethem refer to art and culture in the abstract, drafting proposals fit to encompass all art forms and all artists. The unnamed author of the law review note “Jazz Has Got Copyright and That Ain’t Good,” however, focuses on jazz specifically and argues that copyright law, in its uniform approach to the issue of plagiarism, seems mostly inadequate for the task (“Jazz” 1942). The law oversimplifies what is a complex relationship in jazz between source and influence, language and speaker. The author highlights the distinct position of contemporary jazz, which is currently struggling to remain commercially viable and creatively intact (“Jazz” 1940). He cites Geoff Dyer, who wrote that jazz, unlike other musical forms, “has remained uniquely in touch with the animating forces of its origins” (qtd. in “Jazz” 1942). A static art form consisting solely of uninspired imitators—music that remains in touch with its “animating forces” and little else—would certainly struggle to remain contemporary, relevant and popular. Yet jazz is a diverse art form; its artists accept influences from a wide array of styles, many of them outside of the genre altogether. In such variety there remains space for the traditionalist who seeks only to recreate the music of his predecessors. The author points out that in 2002 the average age of those attending jazz events was forty-three (“Jazz” 1940). Of course, this fact underscores the need for jazz performers that can appeal to younger audiences, but a complete transformation would risk losing the support of the current base that traditional jazz serves to sustain. Jazz in its current struggle for public and creative relevancy demands both innovators and imitators—those who wish to reform the music, those who wish to preserve it, and, of course, the many artists who fall somewhere in between.

The music’s reliance on tradition can be extended, analytically, to define the artist’s creative development, which like the art form itself must draw heavily from tradition. Stearns defends imitation as “an inevitable component of creation,” yet stops short of noting its significance to the creative development of the imitator (513). Lethem, too, focuses on the specific products of creation. He defends “second use” in reference to the art form, and not in relation to the artist (64). But perhaps the most defensible form of imitation is that which benefits the imitator over a sustained period of development. Jazz in particular requires imitative study, which helps musicians learn the intricate language and vast tradition of which their music is a part. The jazz artist cannot innovate without first learning to imitate. Indeed, Grasso’s Parker obsession can become a positive foundation of influence, an entry point into his study of bebop language and jazz repertoire. The emphasis here is no longer on the development of a given creation; instead, the focus is on the individual development of the creator.

Even with this analysis in mind, I view Grasso’s performance with a degree of ambivalence. Charlie Parker’s own words effectively summarize my discomfort. “Music,” Parker once observed, “is your own experience, your own thoughts, your wisdom. If you don’t live it, it won’t come out your horn” (qtd. in “About Memorial”). Improvisation, in particular, is a highly personal means of expression. Grasso’s playing, though remarkably fluid and advanced, seemed at times unnatural, forced, bordering on disingenuous—a musical sort of self-denial. Parker’s style was a reflection of where he came from and who he was, a product of his time; his personal musical vocabulary will never accurately express Grasso’s ideas. Grasso’s work contains an implicit contradiction in that he remains personally detached from what he intends as a medium of personal expression. And there is a certain irony in paying homage to Bird, a musician notable for the ways in which he broke from tradition, through mimicry. Grasso, by reproducing the music of Charlie Parker, adopts an approach that betrays much of what Parker’s music represents.

Imitation in jazz plays a fundamental role in the creative development of an artist, and it remains integral to the effort to preserve a rich tradition of music. Lethem’s description of the commons outlines a creative environment in which imitation is permissible, even valuable. I, too, see promise in the imitators and value in their imitations. Grasso, by immersing himself in Parker’s music, has acquired a technical facility that is nothing short of breathtaking. As a virtuoso, he is uniquely equipped to develop a singular mastery of the music. Grasso’s job, now, is to move beyond his superficial rendering of Parker’s language and embrace, in its stead, Parker’s audacious spirit. 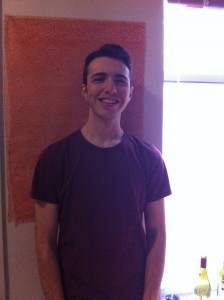 ELI ALLEINIKOFF '16CC graduated from Columbia University in 2016 with a major in English and Comparative Literature. At Columbia, he was active in the undergraduate music program and wrote for the student-run magazine Rare Candy. He currently lives in New York, where he freelances as a composer, musician, and editor.