“In this distribution of functions, the scholar is the delegated intellect. In the right state he is Man Thinking. In the degenerate state, when the victim of society, he tends to become a mere thinker, or, still worse, the parrot of other men’s thinking.”

It is rare for a writer to put his or her theory at risk by exposing its secret vulnerability, to set out on that fragile, shaky wooden bridge stretching across a chasm—the gap between the two cliffs of understanding. Daunting is the possibility of trust collapsing. One would be a fool to turn one’s idea against oneself. Yet, Jeffrey Cohen leads readers of his essay, “Monster Culture,” on this bridge of uncertainty when he poses a polarizing question that could either make the readers believe him completely or doubt his entire theory: “Do monsters really exist?” (20).

In “Monster Culture,” Cohen extensively discusses and analyzes monsters in connection with the cultures from which they rise. “What I will propose here by way of a first foray, as entrance into this book of monstrous content, is a sketch of a new modus legendi: a method of reading cultures from the monsters they engender,” he begins (3). Maintaining the formal tone of an academic, he contends that monsters rise at the “crossroads” of a culture, where differences emerge and anxiety heightens. The monster is an embodiment of difference—of any quality, whether it be ideological, cultural, sexual, or racial, that inspires fear and uncertainty in its creators (7). The monster is frequently a “disturbing hybrid” that defies categorization––its hybridity rebels against nature (6). And though there are fictional monsters, real people can become monsters too. In order to bring “freaks” under control, those who abide by the standard code of the day impart monstrous identities to those who do not. Anxiety is what breeds them and defines their existence. Thus locating the origin of monsters, Cohen strives to reveal our culture’s values and tendencies. For the vast majority of the essay, the monster is simply the subject of our examination, an otherworldly creature under our scrutiny.

It is when Cohen approaches the end of his essay that he adds another dimension to the monster’s entity and exposes its vulnerability:

Perhaps it is the time to ask the question that always arises when the monster is discussed seriously (the inevitability of the question a symptom of the deep anxiety about what is and what should be thinkable, an anxiety that the process of monster theory is destined to raise): Do monsters really exist?

In an essay in which monsters are central, he chooses to investigate in his final paragraphs whether monsters even exist after all. This query boldly shifts the focus away from the discussion of his monster theory and introduces a counter argument, pushing readers to either end of the spectrum of their belief in monster theory. They will have to choose whether monsters exist, and whether they will believe or disregard Cohen’s work. Pressing his readers to decide, Cohen places his readers in this foggy gap between the two extremes in order to, paradoxically, eliminate their indecision about his theory.

From the first page––in fact, the first sentence––Cohen seems to be building up to this eruption, the boom moment. Grave and rather stiff in his tone, he is full of purpose––“What I propose here . . . is a sketch of a new modus legendi” (3). By starting with a rather abrupt announcement, he lays out his objective plainly and explicitly as he launches into a “foray,” a sudden raid, to destroy the protective walls of convention and comfort (3). The risk he takes in unveiling his argument’s potential flaws and testing the readers’ judgments will bring forth the anxiety that permeates not only his essay, but also people’s minds. This sense that a quest is underway reappears in the diction of his concluding passage. His language and tone, departing from the academic study of monsters, demonstrates a serious yet playfully provoking attitude toward the audience. We see the subtle, ironic sense of humor that he has well hidden under the seriousness and technicalities of an academic. Imagine him smirking as he encourages, “Surely they must, for if they did not, how could we?”—content that he has the power to spark trouble and uneasiness in his readers. But to arrive at this point, he detoured from his scholarly discussion of his theses.

Let’s return to the beginning of the passage. The word “perhaps” marks a careful interjection that brings a pause to the flow of his ideas. It is a gentle motion to stop and think. The following phrase “it is time” displays Cohen’s anticipation: he has been building up toward this moment. Thus pulling his readers out of the text and back into reality, he raises the central question: “Do monsters really exist?” (20). The answer to this question holds the key to his theory’s credibility. Can we trust his theory, which is wholly based on the assumption that monsters do exist? His answer is a testament to his confidence, for he replies, “Surely they must” (20). Sly and expectant, his response is not only a challenge to the conventional understanding that monsters are forms of our imagination, but also a design to trigger a little indignation from the readers. For example, the word “surely” gives a sense that his answer is an obvious one that “surely” everyone should know (though he provides no more concrete evidence than his emphatic interpretation of common sense). Indeed, Cohen’s use of “must” suggests that there is no other rational answer that can be true. With these subtly forceful word choices, he appears to challenge readers’ knowledge or, more importantly, their pride in what they know. We can start to see here that Cohen is aiming at a specific part of the subconscious—the ego—that will allow him access and even control a reader’s sense of what is real.

Cohen demands a definite answer, a conviction—whether it be disregard or trust—for vacillating on that unsteady bridge is a source of anxiety in itself. But under the appearance of a perfectly probable motive lies a more intricate pursuit. By calling the question’s inevitability a “symptom of the deep anxiety about what is and what should be thinkable,” he challenges his audience’s scope of thought (20). Notice his inclusion of the word “should.” The clear, crucial distinction between what “is” and what “should” be thinkable serves to differentiate the mundane, average thinking ability from the sophisticated intellect Cohen requires from his readers. It is his way of coyly, maybe even with a hint of haughtiness, asking, “Can you handle my ideas?” In an ever-so-charming manner, he prods our ego—something that we so treasure that we will go to extreme lengths to save it from damage or belittlement. With his suave patronization as the bait, he is fishing for our overprotectiveness of our egos.

And as Cohen’s prey, the readers may feel their ego threatened and become perceptibly anxious. When Cohen calls “the inevitability of the question a symptom of the deep anxiety,” “symptom” is also a carefully chosen word that appropriately renders a disease-like quality. According to this notion, anxiety is a contagious epidemic––one that takes over people’s reason and causes them to constantly feel insecure, leading them to eventually produce monsters. Interestingly, anxiety in Cohen’s text is a revisited subject—a constantly reoccurring term—that mirrors the prevalent, lingering nature of a disease. It is ironic that his own monster theory, which analyzes the anxieties that create monsters in the first place, might itself engender anxiety—both his and his readers’. The anxiety can rise simply from the essay’s content (a solemn discourse on monster), which Cohen says inevitably prompts his central query, or it can also come from ambivalence regarding the question (of the monster’s existence) itself. “Monster Culture” brims with uncertainty and tension.

In many ways, then, reading “Monster Culture” is not just reading but rather thinking and questioning, and all the while coping with anxiety. Fueling the anxiety, Cohen establishes a dependent relationship between monsters and us. According to the rhetorical question in “Surely they must, for if they did not, how could we?” we cannot exist if monsters do not (20). But consequently, if their existence equates to our existence, does that not mean we are monsters? Here is the epitome of the break between thinkable and unthinkable. We all are monsters, and in choosing whether or not one can accept that fact is the key to complete comprehension of Cohen’s theory—and deciding on which end of the bridge we will land. In fact, with the question, Cohen allows the readers to actively experience the making of a monster. As Cohen says, we detest monsters. So, we naturally don’t want to be monsters ourselves—or casted out as different or freakish. But when Cohen suggests that we are all monsters, a non-monster (who is thus unlike all others) becomes a monster nonetheless. With this prospect, anxiety turns into panic, and as a result, his question “If they did not, how could we?” acts as reverse psychology: rather than be appalled, we are tempted to swiftly accept Cohen’s bait and concur, “Yes, you are right. I, too, am a monster.” We don’t want to be left behind on that bridge. When the essay ends and the bridge falls, we could either plummet down and flounder in that bottomless gulf of uncertainty and anxiety—with no one to pull you out, to persuade you to either side. Or, we could escape the easy way: follow his lead.

Thus, Cohen’s concluding inquiry was not a question at all, but a powerful shove to his readers toward believing him completely. Though in a glance, he appears to be simply questioning the existence of monsters, he is really testing the readers’ level of thought and urging others to question everything and everyone (even him, the author, and themselves). But, even in this, there is deception because he in fact is pushing the readers to the side the bridge that corresponds to trust and belief in him. By speaking to the readers’ egos, he actually makes readers, afraid of humiliation, want to agree with him. And with the suggestion that everyone is a monster, he entices them to accept it as a plainly apparent reality. Rather than putting his theory at risk, Cohen has convinced his readers––by causing their anxiety to rule over their reason––to want to be on his side even if they aren’t necessarily his believer. Thus, the vulnerability exposed isn’t that of his theory, but that of his readers. “Monster Culture,” then, is Cohen’s lonely battle against “un-thought,” which ironically, and unfortunately, shows the prevalence and inevitability of it (3). 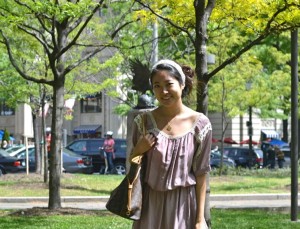 SUE BAHK '15SEAS is an undergraduate student in The Fu Foundation School of Engineering and Applied Science. Though she is an engineer, she considers herself also as a humanities person who believes in the value and power of writing. She was born and raised in Seoul, South Korea, but started studying in the States since the 6th grade. In her free time, Sue enjoys reading, listening to music, and traveling.