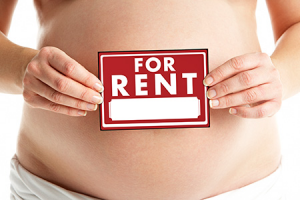 Movies, music, hotels, apartments, parking spots, and the list goes on. Almost anything you can dream of owning can be yours for at least a short period of time. But we do not think much about the ethics of renting movies and apartments, do we? So long as we follow the renter’s agreement, we feel okay. Sometimes even violating these contracts does not cause much unrest. My family had a running joke when I was growing up: There was the mortgage, the weekly food bills, and the long-standing Blockbuster late fee. I can say with all candor though, that being late to return my movies never kept me up at night. There are, however, examples of more egregious violations of a renter’s agreement—ones that I cannot simply dismiss like I did my family’s long-standing late-fee.

Surrogacy is just one of many options available within the scope of assisted reproductive technology (ART) that allows struggling couples to have a child. The term itself can mean different things, depending upon how it is carried out. Traditional surrogacy involves either artificial insemination or in vitro fertilization of sperm from the donor using the surrogate’s own egg. Gestational surrogacy, in contrast, is a method by which the surrogate carries a pregnancy that has been made possible from the egg and sperm of the intended parents (and/or a donor egg and/or donor sperm). The latter method ensures that the surrogate herself is not genetically related to the child; she is only carrying the pregnancy to term. All things considered, it is not out of the question to draw a comparison between surrogacy and rental agreements. Unfortunately, this simplistic comparison ends there.

There are so many reasons that surrogacy is not simply a “womb” rental, why no surrogate transaction is easy, and why the practice itself has drawn up so much controversy. In recent news, a case involving surrogacy has brought up this controversy once again. In early 2015, a forty-seven-year-old woman was hired as a surrogate to carry a pregnancy for a single man in the state of Georgia. The rental agreement in this case was as follows: the woman was promised approximately $33,000 from the sperm donor if she promised to carry his child to term and relinquish all parental rights following the child’s birth. She was implanted with three embryos, which is typical because not all embryos are expected to be successful. The embryos contained the donor’s sperm and a twenty-year-old egg donor. In a highly unlikely event, all three embryos were successful and the woman found herself carrying triplets. When the intended father learned that all three embryos were growing successfully he asked the woman to terminate one or more of them. The rationale for this request is unclear and not represented uniformly across all news sources. While the U.K.’s Daily Mail cited that the donor father became nervous at the idea of triplets, both theNew York Post and the Washington Post reported that he grew nervous at the idea of fetal complications. Historically, multiples are known to have lower birth weight and a higher likelihood of medical problems.[1][2][3] Though the background of this specific case is unique, I believe it speaks to something more important about the way surrogacy is regulated in the United States. Namely, that there is far too much uncertainty surrounding the surrogate-parent contract.

Generally, the United States is recognized as a fairly liberal country regarding the use of surrogacy. Countries such as Germany, Italy, France, Spain, and Portugal prohibit all forms of surrogacy. This one aspect of American liberalism, however, has not translated into what should be uniform policies about all aspects of surrogacy across jurisdictions. Different jurisdictions have different rules about surrogacy. Some have declared the entire activity illegal while others have vested the legal rights with the intended parents.[4]Some jurisdictions have even required that the surrogate mother relinquish her parental rights upon giving birth so that the intended parents are able to adopt the child.[5] Add to this complexity the issue of paying the surrogate (as in the case of the woman who expected to receive $30,000 for her services) and the issues within surrogacy become riddled with myriad complexities.

While there are many noteworthy aspects of this particular case, such as the fact that the woman was much older (forty-seven years old) than the typical gestational surrogate, the central concern is this: in the United States, the law has not entirely caught up with the science of ART, especially surrogacy. An unsettling comparison between surrogacy and body rentals is not an absurd analogy. In this case, the woman was hired as a gestational surrogate, only there to carry a child. She was, by some crude measure, the means to an end, i.e., a uterus to be rented. The most important aspect of this comparison, however, lies in its social, political, and legal implications. Are women being ‘commodified’ when they become surrogates? Is surrogacy on par with ‘baby buying’? Does a woman have more claim to a child she carried for nine months, regardless of it’s genetic origin? These implications – and questions that follow – must be acknowledged and debated in order for a consistently safe, transparent, and ethical surrogacy practice to emerge. More importantly, the US needs to find a way to approach the question of surrogacy more uniformly.

[2] Ashley Collman, "Pro-life Surrogate Files Lawsuit against Postal Service Worker Who Hired Her to Get Pregnant and Then Demanded She Abort One of the Triplet Embryos.", Daily Mail 2016. Accessed February 19, 2016. http://www.dailymail.co.uk/news/article-3385416/Pro-life-surrogate-files-lawsuit-against-postal-service-worker-hired-pregnant-demanded-abort-one-triplet-embryos.html.