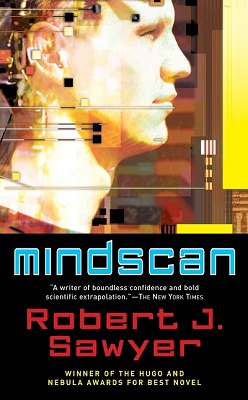 Science fiction is a ripe area for bioethical analysis. The consideration of how technology will impact lives in the future is of great concern to bioethicists, and the power of fiction can bring the energy of authentic human emotions and relationships to what might otherwise become a decontextualized endeavor. Mindscan by Robert J. Sawyer (2005) is just the sort of book that can get us thinking in productive ways.

The book is mainly set in Canada in 2045. In this hypothetical future, there is a new technological possibility for extending life, though it is very expensive. A corporation named Immortex has developed the Mindscan process. A digital copy is made of the brain, and it is then transferred into an artificial body, which is designed to look like the original body at a self-identified ideal age (with a few upgrades, such as removing bald spots and subtle enlargements to male genitalia). Most individuals opting for this procedure are elderly and from the United States, where the regulatory climate is too conservative to support Immortex or its process. Of course, this procedure is also a commercial endeavor, and there are sales pitch seminars designed for the uncertain. The promise is not only a continuation of the authentic self, but also of the tantalizing possibility of eternal life: "Our artificial brains congeal out of quantum fog, forming a nanogel that precisely duplicates the structure of the biological original. The new version is you - your mind instantiated in an artificial brain made out of durable synthetics. It won't wear out. It won't suffer strokes or aneurysms. It won't develop dementia or senility. And... it won't die. The new you will live potentially forever" (20-1).

At the center of the story is Jake, a 44-year-old man with an incurable condition that may result in death at any time. This same condition is what left his father in a minimally conscious state for almost thirty years, and after waiting in vain the development of a cure, he has finally come to the conclusion that this new technology is his best option under the circumstances. Of course, there is a catch. Rather than actually transferred, consciousness is copied, leaving the original intact and needing a place to go. For this reason, the luxury retirement resort “High Eden” has been created on the far side of the moon. The copy and the original can never meet, mainly to ensure the psychological health of the new version, and so the lunar trip is one way only.

At the sales pitch, the original biological Jake meets Karen, an elderly woman who made her fortune writing children’s books. Then, as the book proceeds after the split with two narratives of the two Jakes, the second Jake meets the second Karen, now looking 30-years-old in her new artificial body. While bio-Jake ascends to the moon, neo-Jake attempts to adapt to his new body within his old life. Of course, it is not as seamless as promised: his dog does not recognize him any more because he no longer smells right, and his mother and girlfriend are not quite comfortable with the new him. Of course, we can not be surprised that surgery for the original Jake’s incurable condition soon becomes available, leaving him facing forty more years in a home for the elderly. We also must expect that he wants to reclaim his life, whether it is forbidden or not. Without giving away too much of the story, suffice it to say that he finds a way to return to Earth.

Karen’s transformation is also an important component of this story. The new Karen is rejected by her son. When she decides to continue her famous book series, he sues her in a court of law for copyright infringement. The resulting drama, questioning the legal validity of transferred selves and the continuities of selfhood, is a window into the philosophical arguments that are becoming immediately relevant to the world. A romance between new Karen and old Jake also poses interesting questions: does age difference mean as much when your body looks 30 and yet may be immortal?

There are many questions that have extreme resonance for bioethics today and for the future. Is the brain synonymous with mind?  What about a soul? Is continuous memory of selfhood the same as being the same self?  One of Immortex scientists points out an important scientific conundrum: “consider the fact that the atoms that make up your body are completely replaced every seven years: there’s not one bit of the you who was once a baby that still exists; it’s all been replaced. Are you still you?” (25). While the exact details are still under debate, the fact remains: natural processes of material replacement are a reality. The body you had a child is now almost completely gone at a molecular level, yet you still remember your childhood. Are you still you?