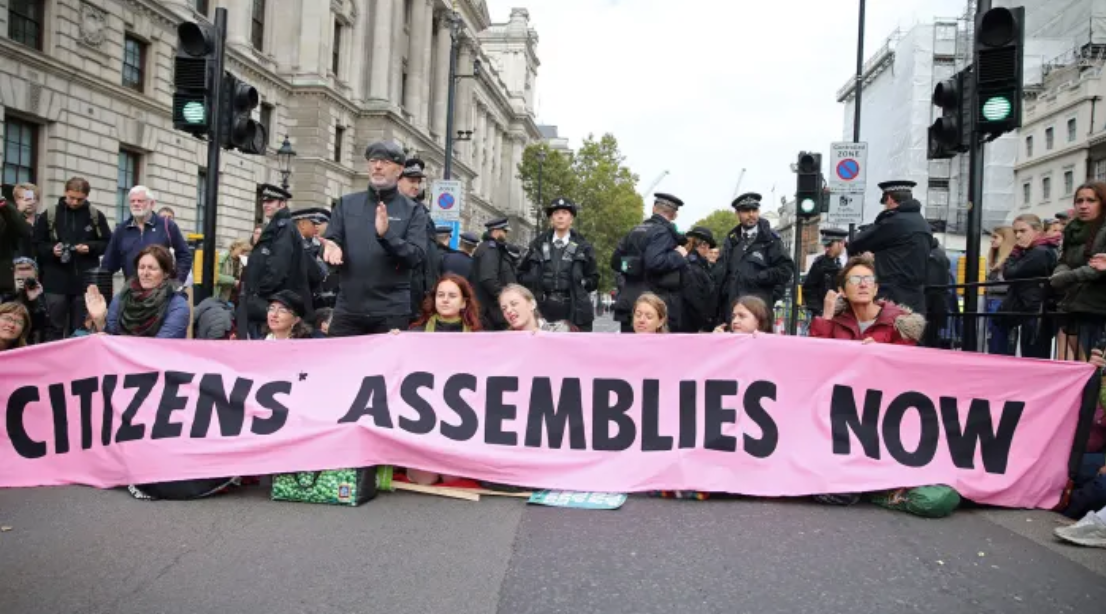 Climate change activists block the road near the House of Parliament in London. Photo: Isabel Infantes via Financial Times

When traditional policy-making strategies are not enough to keep up with the rapidly changing concentrations of carbon dioxide in the atmosphere (now at a whopping 414 ppm), we must look to other methods of decision-making that engage the public in the severity of our current climatic situation--enter citizens’ assemblies. Citizens’ assembliesare policy-making convenings that allow a diverse group of people to engage in deliberative democracy. They have been welcomed by climate activists as a democratic method to generate “bottom-up” strategies that have the support of the public. Our changing climate requires us to make sacrifices in the ways we live our lives to slow the negative effects of climate change; citizens’ assemblies allow us to have a stake in deciding what and how we change.

At the core of a citizens’ assembly is the element of random selection; citizens are selected without bias or knowledge or their opinions on relevant issues. In September 2019, Stanford University’s Center for Deliberative Democracy(CDD) used random sampling to convene its America in One Room conference. This conference of 526 randomly-selected registered voters was designed to gauge Americans’ general views on the most pressing issues of the 2020 presidential election and foster bipartisan conversation. Voters were randomly selected from AmeriSpeak, a platform developed by the NORCat the University of Chicago. Random selection allowed for a more representative view of Americans’ diverse opinions, that is not easily gleaned from typical surveys that tend to target specific demographics and social, political, and economic value systems.

In contrast to broader ideology-based surveys, citizens’ assemblies can provide valuable information when used to develop issue-specific policies, such as environmental regulations in the face of climate change. The United Kingdom recently ran its Climate Assembly UK, a four-weekend long conference for randomly-sampled Britons to discuss how the country should meet its goal of net-zero greenhouse gas emissions by 2050. The results of the conferences will be presented to six select committees from the House of Commons, where they will be debated for implementation.

Topics being discussed at the Climate Assembly UK were questionslike, “What practical solutions are there to change our consumerist attitudes?” and “How do you think reaching the target of net zero by 2050 will affect social inequality?” Inquiries like these highlight the social complexity of environmental policy. To design meaningful policies, decision-makers must respond to both scientific consensus and human input.

Countries are not the only entities that must decide how to address climate change. Colleges and universities share this responsibility on a smaller, yet still crucial, scale. Columbia University is the second-largest landowner in New York City, outranked only by the Catholic Church. Operating its immense real estate holdings, transporting students and faculty around the world, and managing its waste leads Columbia to be a major emitter of greenhouse gases. While primarily an academic institution and business, Columbia must also be cognizant of its role as a polluter and take steps to mitigate its emissions. Just as the UK is employing a citizens’ assembly to create environmental and climate policies, Columbia should do the same.

Last academic year, Columbia for Carbon Neutrality, a student coalition, pushed for the administration to commit to achieving carbon neutrality by 2030 in its 2020 Sustainability Plan. Since this campaign, President Bollinger announced the creation of a Climate Change Task Force, led by Alex Halliday, Director of the Earth Institute. In November, the Task Force held two town halls to involve students in the discussion of how the University might address climate change. And on January 30, 2020, the Task Force finally released its 104-page report, suggesting the novel idea that “the University should make a bold pledge, such as carbon neutrality.” At last! We might actually be getting somewhere!

These long-awaited steps taken by Columbia prompt the question of whether the University is doing enough to combat climate change. Is our current course of action the most efficient? Based on the Task Force’s report, their main priority appears to be to designate Columbia as a hub for conversations and research about climate change, mainly through the creation of a Climate School. While this new Climate School would provide the space and resources for cutting-edge scientific research, we must understand that the research and data already exist. We already know that we must work to keep the global temperature from rising more than 1.5 degrees Celsius above pre-industrial levels. We already know that we are currently in a sixth mass extinctionof species. And we already know that people will be displacedaround the world due to diminishing natural resources, like drinking water. We have the information; what we need now is action.

To develop policy solutions to the University’s role as a polluter, Columbia should hold a Citizens’ Climate Assembly. This assembly should incorporate a random sampling of students, faculty, and staff who bring diverse values and areas of expertise to the discussion. Experts on cost-benefit analysis and the feasibility of technologies (for instance, for retrofitting campus buildings) should also be present to provide informed perspectives.

At the basis of the Columbia Citizens’ Climate Assembly should be the understanding that the members of the Columbia community itself should be part of the decision-making process because our lives are the ones these policy decisions will impact. For too long, policy-making has operated without the involvement of the public; citizens’ assemblies provide an opportunity to end this narrative. For instance, many emissions reduction strategies that the University must consider, such as decreasing air travel or purchasing carbon offsets, will directly impact the lives of the entire community. A citizens’ assembly will allow the people who will be most affected to be involved in making these decisions.

Columbia University is at a crossroads of two eminent decisions regarding how it will function in our world’s current climate crisis. It can proceed with the status quo, educating its students about climate science while continuing to pollute. Or, the University can become a leader in climate action by employing the power of its community members to discuss how Columbia can mitigate its emissions and support those most affected by climate change. The choice is the administration’s.