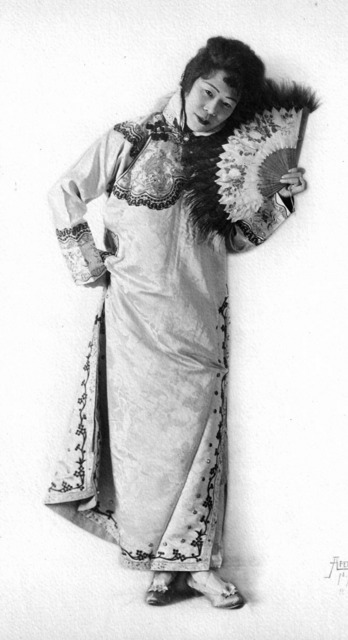 Program Description:
Centered around a discussion of director/producer Marion E. Wong’s The Curse of Quon Gwon (Mandarin Film Co., US, 1916) and featuring new intertitles along with Wong family research, this program puts Wong and director Esther Eng together in context of their shared status as female Chinese American filmmakers. How did the culture of American Chinatowns (New York, San Francisco, Oakland) contribute to the effort of Chinese nation-building that facilitated support for a nascent national film industry in 1920s Shanghai? This story includes the Chinese rejection of US-produced The Red Lantern (Nazimova Pictures, 1919) and The First Born (Hayakawa Feature Play Co., 1921) that led to the 1921 formation of the Great Wall Company in Brooklyn, New York. In how many ways did overseas Chinese and their families imagine a national industry that produced Chinese motion pictures for the international market?

Online Screening
Friday, June 4—7:00pm–9:30pm EST
The Curse of Quon Gwon: When the Far East Mingles with the West. Dir.: Marion E. Wong (Mandarin Film Co., US, 1916). RT: 50 min. Source Archive: Academy Film Archive.
Virtual viewing for The Curse of Quon Gwon (PLEASE DO NOT CITE OR CIRCULATE – FOR WSS USE ONLY)
Introduction: Cordelia Siporin
Film Program Note: This screening marks the international debut of a new version of The Curse of Quon Gwon that contains the restoration of the long-lost plot of the film. This plot appears through reconstructed intertitles that approximate the essence of what the film’s missing title cards are believed to have once conveyed, as analyzed and interpreted by Prof. Cordelia Siporin (who will lecture on this process on Saturday, 3:00pm–5:00pm EST).

[This online screening also includes Segodnya / Today (Cannons or Tractors?) and A Comedy of Errors.]

Related Films
Golden Gate Girls (S. Louisa Wei , 2014, 90 mins.)
A documentary on Hong Kong's first woman director Esther Eng (who was Chinese American) with pioneers in her time including Anna May Wong and Dorothy Arzner.
Click for trailer and whole film (register as a user and watch for free with voucher "CATHAYPLAY" valid until June 10, 2021).

Havana Divas (S. Louisa Wei, 2019, Director's Cut, 96 mins.)
Caridad Amaran learned Cantonese Opera in Havana Chinatown from a Chinese foster father and grew up to be a diva. In her 80s, she performed on stage in his hometown that he never made it back to.
Click for trailer and whole film (register as a user and watch for free with voucher "CATHAYPLAY" valid until June 10, 2021)