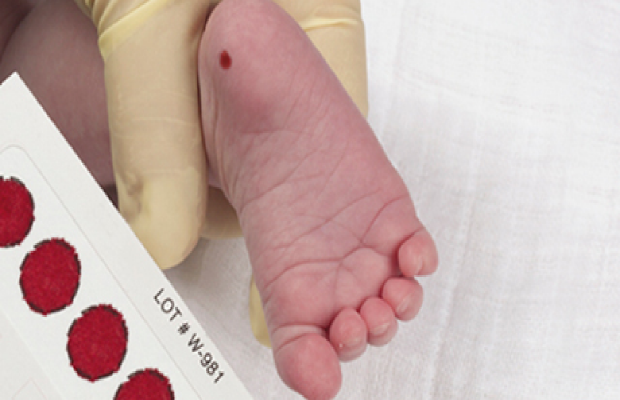 For more than fifty years, screening United States newborns has been a federal public health mandate designed to test infants within forty-eight hours of birth for a set of genetic diseases or conditions that are treatable—such as cystic fibrosis, sickle cell disease, and congenital adrenal hyperplasia. Since the 1960s, newborn babies have been screened by newborn dried bloodspot screening (“NDBS”), an assay developed by microbiologist Robert Guthrie, which involves pricking the heel of a newborn and placing several bloodspots on a collection card made of special filter paper.[1] The bloodspot card is then sent to a state laboratory for testing, usually within forty-eight hours of collection. If the newborn’s screening suggests a disorder, a lab technician immediately contacts the healthcare provider to coordinate clinical care. Early detection and treatment is critical because it helps prevent lifelong disabilities or death.[2]

Since their inception, the state screening programs have allowed for the release of bloodspots for public health research. Until recently, in all but a few states,[3] parental consent to use NDBS samples has been presumed, unless parents actively opt out. Research projects involving the use of residual bloodspots require review by institutional review boards—a body of scientific and legal experts charged with protecting the privacy rights of the persons from whom the samples came. To ensure the privacy and identity of the newborn samples, the genomic data is protected. Only public health related projects that are approved may go forward, and those that do must adhere to the approved research protocol.[4]

A recently enacted[5] newborn screening law, the Newborn Screening Saves Lives Reauthorization Act of 2014 (“NSSLRA”), reauthorizes $20 million to continue funding for the state-based newborn screening programs described above. However, the law is deeply troubling to the biomedical research community and public health officials due to one of its provisions, which changes the scope of human subjects protection in connection with NDBS.[6] Section 12 of the NSSLRA (the “provision”) (i) reclassifies newborn dried bloodspot screening (NDBS) as research on human subjects, thereby requiring state health departments to obtain parental informed consent for deidentified newborn screening samples[7] and (ii) eliminates the ability of an institutional review board to waive informed consent requirements for research on newborn dried bloodspots.[8]

In a recent JAMA viewpoint, biomedical researchers and policy experts from the National Institutes of Health and the National Human Genome Research Institute warn that the provision on parental research consent can damage public health investigations. As such, these experts believe that more discussion is necessary before modifying the consent policies. They assert that requiring parental consent could reduce the number of samples available for research and therefore adversely impact newborn screening participation rates. This could produce long-term consequences, such as a dearth of biomedical research relating to certain rare diseases, such as leukemia, thereby disadvantaging affected populations.[9] Given the potential of screening samples to benefit public health research—the CDC has even stated that NDBS “is one of the nation’s most successful public health programs”—it is unsurprising that the NSSLRA provision has alarmed public health officials.[10]

While it is true that the provision may hamper important research outcomes, it remains important not to lose sight of autonomy, a core principle of research ethics. As the experts note, “the issue over whether and how to obtain parental consent for health research on residual dried bloodspots represents a tension between respecting individual liberties and ensuring public health,” acknowledging the possibility for technicians to reidentify the samples. Ultimately, the viewpoint concludes that “the importance of biomedical research for public health purposes is too great…to risk seriously adversely affecting the number of samples available for research.”[11]

All things considered, since research using bloodspots has been a tremendous public health success and is likely to increase, it may be worth considering a bifurcation of consent processes (e.g., making screening opt-out and research opt-in), thereby providing comprehensive information to parents in order for them to make a considered decision. Another proposal that has gained traction among some bioethicists is to educate parents earlier—e.g., well before the pre-partum period.[12]

At this point, there remains considerable cross-state variability in the administration of newborn screening. While there have been some recent efforts to standardize state screening processes, such as the Advisory Committee on Heritable Disorders in Newborns and Children,[13] newborn screening laws, including NSSLRA, must work toward developing a regulatory framework that is more palatable to both public health officials and concerned parents.

[6] The provision deviates from the current regulatory definition (45 C.F.R. §46.102(f)), which specifically defines human subject research as involving identifiable private information. The provision is in effect for up to two years after the 2014 law’s enactment, or until an updated Common Rule is released. For the Common Rule generally, see http://www.hhs.gov/ohrp/humansubjects/commonrule/.

[7] Per 45 CFR 46, the Common Rule defines human subjects research as activities in which (i) the research investigator receives samples through direct interaction with living individuals or (ii) the samples are linked to individually identifiable private information. Since dried bloodspots are deidentified before researchers access them, research on dried bloodspots was interpreted not to be human subjects research—until the 2014 law. See http://www.hhs.gov/ohrp/humansubjects/guidance/45cfr46.html.

[13] This committee was established under the Public Health Service Act in May 2015. The Committee recommends that every newborn screening program include a Uniform Screening Panel that screens for 32 core disorders and 26 secondary disorders (US DHHS, 2015). See U.S. Department of Health and Human Services, Advisory Committee on Heritable Disorders in Newborns and Children, http://www.hrsa.gov/advisorycommittees/mchbadvisory/heritabledisorders/index.html.